“…Four-legged support robot. Stationary mode allows it to repair nearby allies, while two heavy weapons make it a formidable enemy on the battlefield…” – in-game description

The Weyland is a medium robot with 2 heavy hardpoints. It is unofficially classified as a heavy robot based on wiki criteria.

The Weyland's ability is called Repair Mode and when activated the bot elevates its hull and becomes stationary, activating a 100-meter radius healing aura (the green circle surrounding the Weyland) that repairs all allies inside, including the robot itself as well as increased damage resistance of 15%. The healing aura repairs robots at a fixed amount of hit points per second (see table), and the higher the robot's level the more hit points it repairs per second.

Note: A robot's hit points can only be repaired up to 80% of any damage taken, so it is not possible to be fully repaired.

The Weyland is relatively vulnerable due to its slow ground speed, large frame, and minor built-in self-protection (only 15% damage resistance).  Because of this it is recommended to use Weyland as a support bot behind the front lines and to remain in cover.

A Weyland is most effective when stationed near teammates guarding an important area (e.g. beacons), allowing allies to repel enemy attackers while the Weyland heals and provides support fire or shielding when equipped with an Ancile.

Another feature to note about the Weyland is that like the Raijin, it can climb some buildings such as the central Power Plant reactor and some places in Moon. Doing so will allow the commander to gain a better perspective over the battlefield for mid-ranged and long-ranged engagements, although it does not suit Weyland's role too well as a healing robot (which requires it to be close to allies).

Some effective builds for the Weyland are:

Note: It is advised to usually have a Weyland equipped with close-mid range weapons so it has the firepower to defend itself and its teammates, as it will nearly always be most effective supporting teammates equipped with brawlers and knife-fighters (which do the brunt of the fighting). 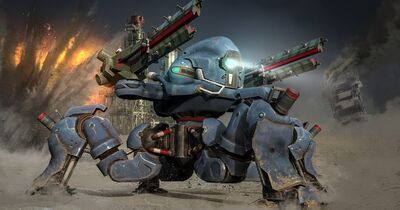 Weyland
Add a photo to this gallery

Retrieved from "https://warrobots.fandom.com/wiki/Weyland?oldid=336717"
Community content is available under CC-BY-SA unless otherwise noted.