The Vityaz is a medium robot with 1 heavy and 2 light hardpoints.

A versatile and balanced robot, the Vityaz is good for beginner players in the lower leagues.

Its average durability and groundspeed coupled with 1 heavy and 2 light hardpoints allows the Vityaz to serve in multiple roles. The elevated position of the heavy hardpoint on its right shoulder allows the Vityaz to effectively corner-shoot while the left side of its hull remains in cover.

These are some recommended setups for the Vityaz:

The ability to mount a Thunder and two other close-range weapons like Aphids, Pinatas, or Magnums makes the Vityaz a potent close-ranged fighter.

At medium range the Trident combined with Pins are good for kinetic splash damage.  A Vityaz armed with a Kang Dae, Nashorn, Flux or Trebuchet paired with Gekkos are good for long-ranged sniping.

Viyatz is unable to equip modules 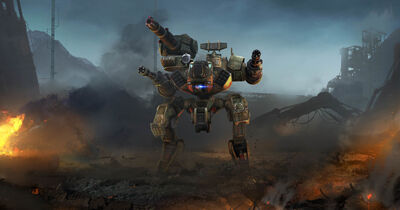