Valley is a map in war robots. It was released in the 3.1 update.

This map is basically a rocket launch facility located in the jungle nearby a research complex. It is the first map to have pretty loud and music-like ambient sounds. According to Pixonic, the facility is located in "Vietnam mountains," which escaped damage from the apparent war.

It has a lot of obstacles on the ground, almost every one of which could be used as a sniper platform.

This is one of the most balanced maps currently in the game, allowing use of snipers, CQC and homing missiles to almost the same extent.

Temples and rock outcroppings are the notable blockades here. The map has a tunnel near the Center, allowing bots to hide from missile strikes.

It is advised to capture the 2 beacons close to each other, and the ones in the corner. Make use of the cover to hide from enemy fire. 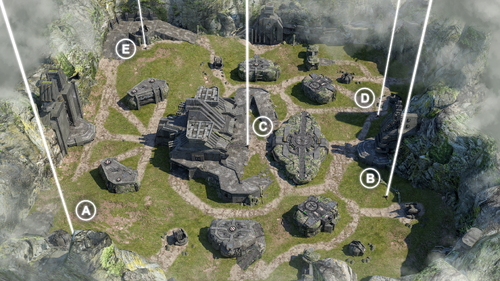 Retrieved from "https://warrobots.fandom.com/wiki/Valley?oldid=266239"
Community content is available under CC-BY-SA unless otherwise noted.