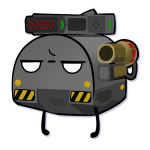 I am not always active on the wiki, but you'll see me working with Icefirephoenix, Lion10903, Cactus Gamer123, F0XTRAUT, Killroy1080 and Piisfun to maintain the wiki, help users and implement the rules :)

I also used to work alongside the now semi-inactive MKsmashed and Alias3002.

We do our best to keep the wiki a fun, safe and informative space.

If you have a question, idea or interesting conversation topic, don't hesitate to ask!

I am also active on the WR wiki Discord under the same username along with several other wiki users such as MKsmashed (Le Ban Hammer), Lion (Mortal Engines), Piisfun, Icefirephoenix and Claudius, IDSMTG, FOXTRAUT, CactusGamer123 and more.

Hi there everyone! I am Golurk 88 (AKA BB Gun) and I hope you enjoy or appreciate my contributions to this cool wiki. My role in the wiki is the monitoring of discussions, advice on how to use heavy, silver and other niche robots in the meta as well as general tips on robot builds and strategy.

What I specialise in on the wiki is the creation of different blogs on robots, weapons and strategies in the game, as well as a few guides on the wiki and of course, the upkeep of robot/weapon pages (I usually tend to edit the Strategy section).

I also came up with the idea of having a 'Possible Setups' section for each robot page, which Icefirephoenix and I worked on for quite a while. Finally, I overhauled and am the self-appointed sentinel of the Cancelled Robots, Weapons and Game Features page's to maintain its new and more organised format.

I do my best to be friendly but spam, profile copying, swearing, threats or vandalism of pages will end up with me using my powers to the furthest extent to stop the rule-breaking :)

This was my speciality on the wiki. While other users have created some user blogs, we all do them on different topics (e.g Piisfun on templates and coding and Icefirephoenix on updates). My blogs are on many different robots and weapons as well as in-battle and general strategy. I've also made some blogs about the wiki. Enjoy!

Note: Don’t copy my blogs or the unique blog ideas. Expect trouble if you do (excluding general ideas like guides for bots, obviously).

If you read any of my blogs, remember that they did have many comments before I changed my username, and for some reason they didn’t register :(      (E.g I had 138 on my Abilities blog).

Please take care that a significant number of my blogs have incorrect damage/health/speed/cooldown statistics due to subsequent buffs/nerfs by Pixonic. However, general strategy and bot/weapon usage advice remains the same.

General description of robots, their strengths, weaknesses and unique playstyles.

General description of weapons, their effectiveness and purpose.

Strategy and Other Blogs:

Advice and information on specific strategies, game mechanics/features and plastyles.

Miscellaneous information, ideas and opinions on this wiki and World of Tanks (Blitz).

For experimenting with and overhauling entire pages

(The titles below will probably be cancelled)

Note: The difference between Potential and Upcoming topics is that the latter are definitely going to be created unless something really significant in the game happens and the topic is no longer relevant. Potential topics are just random ideas that I have and list down in case one day I run out of upcoming topics. I do post blogs every so often and when I do I try to make them as useful as possible. Please tell me if you have any cool ideas!

Useful Tools for Moderators and Admins:

Template for *Blasphemy Removed*  (in case of crimes committed against Fujins and Raijins):

Template for explaining why all new robots are medium: {{Why Medium}}

[[User blog:Username/Blog name]] (For a condensed blog link, with brackets)

In order to send an Admin/Moderator only message (Chat mods are technically excluded here):

Close the thread (removes quote button) Without step 3, it can be read by either pressing edit or pressing quote. With step 3, only Admins, Discussion Mods, and the person whose wall it is on can read it (they can reopen the thread and press quote).

Over the past 4-5 years when I played War Robots my hangar has gone through many significant upgrades, acquisitons and changes. Past hangar robots/setups have been mentioned in my Top 10 Achievements section down below.

Current Situation: As War Robots is now pay-to-win and player unfriendly, Stage 2 of my Hangar Upgrade Plan has been shelved, probably indefinitely. I very rarely play War Robots now because...well, you all know why and play a lot more WoT Blitz and World of Warships.

As a result of the above all the statistics listed below are correct and will likely remain so for a long time.

I was in Diamond I when I stopped playing but it is highly likely that I would end up in Diamond III or even Gold I should I start playing again due to most of my robots and weapons either being unexceptional or obsolete.

Zeus Fury (can alternatively be equippe with 2 Tridents and 1 Zeus, all level 6 including bot)

Hover (level 5, is equipped with level 5 Molot Ts and a Molot)

Other Key Facts and Veteran Bots:

My Favourite Robots: Fujin and Raijin

This is a list of users who I either admire, will remember for funny reasons or have a good opinion on them. Please do not take this personally if you aren’t on here, as I haven't updated this list for quite a while.

Notice: This isn’t in order.

Alias3002: Definitely the best Admin this wiki has had. Great to talk to about WoT and other fun stuff as well.

Icefirephoenix and Piisfun: I haven’t talked to them as much as I did with Alias but they both seem reasonable and are awesome at templates. Sad to see the latter leave the wiki.

MKsmashed: A relatively new mod but is well-suited for the role, and is quite popular and very encouraging to normal users. Quite friendly as well.

Ragnarok Ghost: Upon joining the wiki he was slightly sensitive and temperamental but has become a fun guy to talk with and has provided consistently good ideas for the wiki. Will he get promoted? That’s up to the admins, but in my opinion he’s on the right track. His only flaw is his tendency to be slightly oversensitive sometimes.

Lion and Guard: Neither of them are often active anymore and I didn’t talk to them that much because of that( Guard has retired) but they both seemed like relaxed and funny people.

Tkik: Founder of the wiki. That alone is enough.

Defender: Being a WoT Expert and a promising narrator for Pokemon/tank nature documentaries, Defender is great to talk to.

JustAnotherNickname: Not many users will remember him and personally I never talked to him (as back then I was ghosting) but he seemed like a nice, popular and reasonable dude.

Claudius, GD-2 Predator and SpoonyBard: Who doesn’t love daily nonsensical spam on their message walls? They might seem odd at first but they were definitely full of humour. They shall always be remembered by their comrades in the motherland.

HDIOS: One of the most cranky, Raijin-loving and Orkan-hating users in the wiki’s history, and is always ready to have a good debate. Are those qualities necessarily bad though?

I didn’t spend money in this game: May seem like your ordinary user but is almost-always active and is very sociable.

Sky Avenger: His profile picture being a character from Pixel Gun 3D, you can be assured that he is legit XD

Juggernaut: A wiki veteran, Jug has been here since the days of JAN and has regularly been active on the wiki, even during the dark times (when we had no admin). Oh, and he has an Ostrich Death Conga as his profile picture.

My Top 10 Achievements in WR:

Note: They are not in order

All sections below this sentence are probably outdated, uninteresting and irrelevant.

This is based on MKsmashed’s ‘A Great Idea’. It’s anything but professional, but I hope people like it. I’ve tried to include as many prominent users as possible, so here it is:

Robots and Weapons in my Inventory/Hangar:

Things I enjoy about WR and the Wiki:

Things I Don't Enjoy About WR and the Wiki

This is mostly things I don’t like in WR, but also a few irritating things on the wiki:

Funny Pictures from WR and the Wiki:

Retrieved from "https://warrobots.fandom.com/wiki/User:Golurk_88?oldid=330275"
Community content is available under CC-BY-SA unless otherwise noted.