The Typhon is a medium robot with 4 medium hardpoints.

The Typhon's ability is called Blackout 2.0. Upon activation, the Typhon fires three energy cannons: the first one inflicts an Electromagnetic Pulse (EMP) effect, which disables the enemy's ability as well as its Active Module; the second inflicts Lockdown, which prevents the enemy from moving and the third inflicts Suppression, which reduces the enemy's weapon/built-in damage by 50%, taking 1 second to fire. The ability then enters a cooldown phase of 14 seconds before being able to be fired again. The effects applied by Blackout 2.0 last for 5 seconds, before the hit enemy gains resistance to all three effects for another 5 seconds.

The Typhon also has a built-in Aegis-class barrier, a special impenetrable energy shield that blocks all weapon types, including flamethrowers. It is stated to be a 'Streamlined Model', making it much smaller than other Aegis shields.

The Typhon is an extremely versatile bot able to fulfill multiple roles. It is best used as a hit and run / mid-range bot to support Titans and bots engaged against enemies.

As a hit-and-run unit the Typhon is ideally utilized with the modules Phase Shift and either Overdrive Units or Thermonuclear Reactors. It is recommended to mount quick unload weapons like the Cryo so that the Typhon can dash out, unload and dash back in. Its streamlined Aegis shield protects its hull from damage, but due to its weak durability the commander needs to use Blackout 2.0 to suppress the targeted enemy as soon as possible. As the Typhon's Blackout 2.0 can only inflict its debuffs on one enemy per ability use, it is advised to target one enemy at once.

As a mid-range support unit Typhon's ability to raise its built-in cannons upon Blackout 2.0 activation and two of its weapons' elevated hardpoint integrity allow it to continue supporting its allies with Blackout 2.0 and 2 medium weapons even when behind cover. If there are no obstacles for Typhon to shoot over, it can still use its Aegis shield to expose itself for long enough to Blackout an enemy and get back into cover without taking damage. Fortifiers are good for this role as they allow the Typhon's shield to tank more damage, and since it also adds to its already-quick regeneration the Typhon will almost take no damage unless fighting at close range.

It's very difficult to get within the streamlined Aegis shield of the Typhon, allowing pilots to charge an enemy at close range as a last resort, even if the enemy is equipped with their own energy, Aegis or Absorber shield (as long as it's not another Typhon). When doing this remember to activate Blackout 2.0 as soon as you get within the enemy's shield to gain a tactical advantage. The commander should also note the Typhon is vulnerable to splash damage (especially ranged splash weapons, like Trident, Tulumbas, Tsar and Pin due to their increased splash radius compared to close-quarters rocket launchers) as its Aegis shield is so small that it won't actually protect the Typhon's hull from splash explosions. As such, steer clear from enemies wielding splash weapons.

These setups are recommended for the Typhon:

The Typhon, being a very versatile bot, has many different possible loadouts. For a hit-and-run assault role (which the Typhon can actually do quite well thanks to its built-in Aegis shield and its triple Blackout cannons), the Typhon can equip Vortexes to unleash a quick yet deadly salvo of missiles (even from behind cover), or Cryos or Orkans for their quick unload, catastrophic damage and ability to penetrate physical shields.

For more long-term close-range encounters (which the Typhon isn't that good at, but can pull off extremely well with allies thanks to its Blackout cannons), Tarans can prove to be extremely deadly, thanks to their continuous blasting and the hardpoint integrity of the Typhon. If Tarans are beyond reach, or if physical shields tend to dominate more than energy ones, Punisher Ts can serve as a kinetic replacement for the Taran, especially with its 500m range (however it is most effective at 300m-ish range).

At mid-range, Shocktrains and Ions are useful for hit-and-run engagements in the lower leagues, which the Typhon is extremely strong at once again thanks to its Aegis barrier and its Blackout cannons.

Currently the best mid-range loadouts are Wasps, Scourges and Atomizers.

Some Commanders use Igniters to support close range engagement against Shells and Titans. Though effective for dealing out tremendous amount of damage the Typhon will likely not last as long when used in this role. 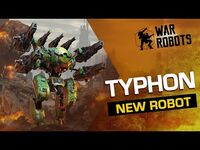 Retrieved from "https://warrobots.fandom.com/wiki/Typhon?oldid=343654"
Community content is available under CC-BY-SA unless otherwise noted.