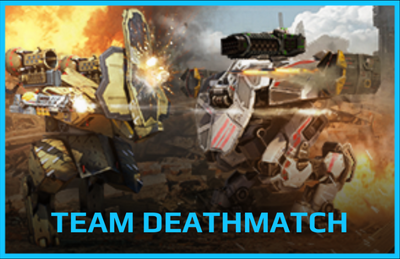 Team Deathmatch is a game mode that was released in the 3.3.0 update. This game mode is similar to the previous two modes (Domination and Beacon Rush) only that all beacons are removed in this mode, allowing players to focus on killing other robots.

Since this game mode completely removes the beacons in this mode, it also allows for the players to completely disregard the beacons and focus their attention on nothing but killing the enemy team, robot by robot. A good strategy to use is to have knife-fighters in your hangar, as well as mid-range weapons, if you prefer this playstyle.

Highly upgraded medium and heavy robots, as well as robots with many hardpoints, are common in this mode, as there is no need for fast light robots to go into the enemy and start capturing beacons, since they don't exist in this mode. However, light robots can be used for surprise attacks on the enemy, especially when using the Stalker since it has stealth capabilities. This mode is also perfect for demonstrating your robot's power and your skill (e.g. by using a Griffin or Inquisitor to descend over enemies and cause panic).

The main downsides of this mode is that because the beacons are gone, the light robots become less useful because of its inability to do as much damage as a heavy robot would, and its survivability in a deathmatch battle is very low. Also, this mode entices for robots to go into cover and stay there because there are no beacons to capture and that they can enjoy not being shot for a very long time (until the player gets bored of it and decides to move somewhere else). This makes it a nightmare for knife fighters (if the mid/long range robots have high DPM) because the knife fighters must charge straight forward to attack, with the risk of losing many hitpoints, if not destroying the robot.