The Spectre is a medium robot with 4 medium hardpoints.

The Spectre's ability is called Descend and when activated the robot cloaks (stealth) and jumps into the air. The stealth effect lasts for 2 seconds when the Spectre lands. After the two seconds of Stealth after landing ends, the ability enters a 20-second cooldown phase.

The Descend ability is similar to the Inquisitor's, however the Spectre's stealth lasts only 2 seconds after landing (compared to 5 seconds with the Inquisitor).

The Spectre is a "glass cannon," meaning it has high firepower "cannon" (4 medium hardpoints) but low hit points "glass." Because of this, the Spectre should be used for ambush, mid-range support, or skirmishing.

When being used as an ambush unit, the Spectre relies on one thing and one thing only-its Descend ability (unless modules like Last Stand or Phase Shift are equipped). If the enemy is not armed with Quantum Radar then the Spectre will most likely be able to destroy them in a short amount of time provided it is inside its jump. This means that close-range weapons like Cryo and Orkan and even Havoc and be used to destroy enemies. However, due to its extremely low health and tiny stealth duration after landing, the Spectre can usually only engage one target or two low-health targets at once unless team-support robots like Blitz, Bulwark, Nightingale or Ares are advancing alongside it to provide relief after landing. For this role, Thermonuclear Reactor(s) or Overdrive Unit(s), Last Stand, Phase Shift or Death Mark and maybe Heavy Armor Kit(s) are ideal Modules for mounting.

When using the Spectre as a mid-range support unit, the commander should always keep close to cover. Unlike when used as an ambush unit, Descend can be used sparingly as the Spectre can always land in cover and can usually outrange most enemies planning its demise. For this role, Descend can be used to provide a vantage point instead of protection. The Legendary Pilot Tal Mokri is a good choice for this role, as when in a vantage point the Spectre can deal increased damage to enemies. The modules Thermonuclear Reactor, Overdrive Unit and Death Mark are ideal choices for this role to increase its firepower, and since it keeps at a reasonable distance it can usually fire without having to worry about the enemy returning fire.

When used as a skirmisher, the Spectre can generally only take on one enemy at once. This is argubaly the hardest of all three of Spectre's roles to peform, but in theory can also deal the highest damage. Sustained brawling weapons like Atomizer, Taran and even Pulsar are ideal choices. Descend should be used cautiously as while it does provide stealth, the jump part will allow any waiting snipers armed with Quantum Radar to blast the Spectre out of the air. It is advised to flee when another enemy sees the commotion and decides to join in. For this role, Heavy Armor Kit, Overdrive Unit, Last Stand and Phase Shift are the best choices for mounting. Thermonuclear Reactors are not good as the Spectre will inevitably sustain damage inside this role.

Due to being a hybrid of a jump and stealth, the Spectre’s stealth ability is considerably harder to use than a normal stealth ability, however with the right timing, it is effective. By making sure you jump into the right area (landing too far from cover makes you extremely vulnerable) and extending your stealth duration (try not to jump to high ground), the Spectre’s stealth ability is amazingly strong. The two seconds of stealth the Spectre has after its jump should be used to seek cover, as using it to maximize damage output will commonly result in the Spectre's small health pool being finished off.

Taking advantage of the Spectre's height advantage mid-jump without worrying about being hit is key to dealing maximum damage. Weapons requiring clear line of sight and timing for ambush tactics such as the Shocktrain go extremely well with the Spectre's Descend ability.

The Spectre is a high threat in the middle leagues but a low to moderate threat in the higher leagues due to its low hitpoints and the use of Quantum Radar by the enemy.

These setups are recommended for the Spectre:

The Spectre is best used for ambush, mid-range support, or skirmishing. For mid-range support set ups with Tulumbas, Wasp, Scourge, Atomizer, or Pulsar are recommended, using the Spectre's ability to escape a dangerous situation. For ambushing the Spectre's Descend ability allows it to surprise targets or gain better shooting angles. High burst Damage Per Second weapons such as Orkan, Cryo, Storm, Corona, or Vortex are recommended for this role. For sustained DPS while skirmishing use Punisher-Ts or Tarans. 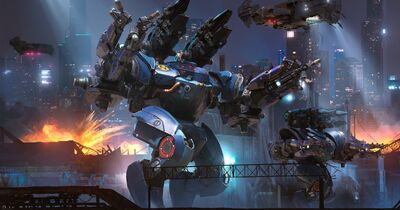