Shenzhen is a city map based on the Civic Center in the Southern part of China, in the city of Shenzhen.

The map itself features many buildings. There are two beacons located immediately to either side of each team's spawn points (A, B, C, D). These beacons are sheltered in the cover of buildings. However, the fifth beacon, E, is located dead center, across from either spawn point. This is often the most heavily conflicted beacon due to its location between either side.

While the flat, cover-infrequent center may be excellent for sniping from afar by heavy weapons, the many buildings located outside E make great cover and are perfect for close-range weapons such as Thunder and Punisher or Orkan.

Beacon A is located on one side of the open central area where the central beacon is located. There is a clear line of sight from beacon C and E. It is common for both teams to trade shots, ducking in and out of cover while defending their respective beacon while fighting for control of the central area.

Beacon B is located behind the cover of the large buildings at the bottom of the map. There are three openings between the buildings which can be used as sniping locations or as entry-point to the central area and beacon E.

Beacon C is located on the opposite side of the central area and can be considered a mirror image of beacon A.

Beacon D is located at the top of the map in an open area surrounded by buildings. It is set far enough back to be protected from direct line of sight fire. However the three buildings between it and the central area are low enough to allow missile fire to reach the area around the beacon.

Beacon E located in the center of the map and is equidistant from both spawn points and beacons A and C. Because of its exposed location, it is almost always very hotly contested by both teams. The central area is frequently a killzone for pilots advancing on the beacon. Especially if the opposing team has a large numbers of long or medium range weapons. However, its capture will often decide the battle and can provide a decisive advantage for the team that holds it.

The abundance of buildings as cover mean that it is absolutely essential to maintain situational awareness at all times. While rare, some ambitious pilots may attempt to sneak up on the other team's spawn point to either capture one or both beacons (A and B or C and D) or disrupt enemy sniping activities or both. Oftentimes, lone or grouped Cossacks will attempt to capture the beacons, while robots (generally light or medium robots) oriented for close-range knifefighting combat will try to destroy any enemy robots with long-range guns, Natashas and Furies specifically. Therefore, it is vital to keep a look-out for these robots and predict their movements to quickly eliminate them. Robots armed with Thunder, Punisher, Pinata, or Orkan are all the more dangerous and need to be dealt with. Snipers are most vulnerable to these weapons because long-range guns have a much harder time hitting at close-range, especially against faster, more agile robots.

Taking Beacon E is a very difficult task. If the enemy team is composed heavily of snipers with long-range guns, they may be able to disable if not destroy you before you reach the central beacon. Therefore, it is usually a good idea a to take beacon E with other pilots; the enemy will not be able to knock out each robot. The best case scenario is seizing E early on and simply laying down artillery fire when necessary, but if capturing is necessary, doing so in groups with your own team's snipers eliminating enemy artillery will greatly increase the chances of success. 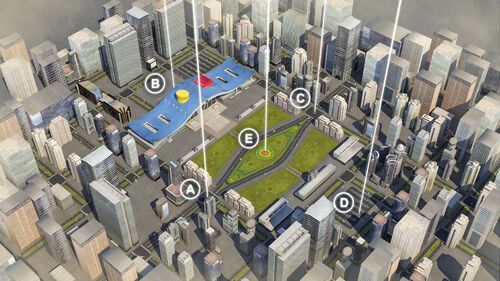 Retrieved from "https://warrobots.fandom.com/wiki/Shenzhen?oldid=266230"
Community content is available under CC-BY-SA unless otherwise noted.