The Shell is a medium robot with 2 light and 1 heavy hardpoints.

The Shell's ability is called Atom. Upon activation, the Shell accelerates by exposing it's core and using it's heat to thrust it forward whilst it opens up its shield configuration, allowing enemies without splash weaponry to damage it directly from both the front and the back. After 5 seconds, the Shell overloads its core unleashing an explosion within a 100m range. Any enemies caught within this explosion will be knocked back into the air and will receive 15,870（at base level) damage. After the explosion Shell retracts its shields and enters a 7-second cooldown phase before Atom can be used again.

The Shell also comes built-in with 8 physical shields, wrapped around the robot's hull, protecting itself from fire from all sides. Each of these shields has varying amounts of durability (see below), and will be shot off separately if destroyed. Being physical shields, they block energy and sonic fire, but take double damage from kinetic shells and are mitigated entirely by flamethrower and rocket weapons.

The Shell is aptly described a scaled-down version of Arthur. The only noticeable differences are that it has physical shields that wrap all around the robot, has a speed boost that goes with its damaging blast, and has stats and weapons fit for a robot and not a Titan. It comes with 2 Light and 1 Heavy hardpoints similar to Arthur's weapon layout of the 2 Beta and 1 Alpha which essentially are the 2 Light and 1 Heavy hardpoints of the Shell, and is also notably arranged in the same manner (The larger weapon is mounted centrally on the top, the smaller weapons mounted on either side). Because of its all-around protection and decent firepower, Shell is an excellent bot for area defense and holding/capping beacons.

A weakness of the Shell is splash damage weapons, as they splash past Shell's physical shields, damaging both shield and bot. Because of this pilots should be vigilant for enemies wielding weaponry such as Cryo or flamethrowers, or even worse Scald-type weapons. Another weakness is when it uses its ability, enemies can directly damage the bot from the front and the back as its shields expand during ability use, so it is recommended to turn and face 45 degrees away from the direction you are receiving enemy fire. Flying bots can also reach angles that allow them to fire over Shell's physical shields to inflict damage. Notable dangers include Hawk or Ao Jun; the shield is rendered useless. One other weakness is that corrosion weapons like the Viper or Hornet that hit it during it's ability will continue to damage Shell, so overexposure can ultimately result in a death from corrosion damage. Due to Shell's eight shields being individual, a single hit from for example the Hellburner's Overload will damage the robot as well as all 8 shields, essentially dealing 9x damage output and charging Nuclear Amplifier very quickly.

The Shell can be extremely effective if played in coordinated squads or clans, since it can draw attention and tank damage from multiple sides, allowing allies to either obliterate them while they're distracted or to nullify their potential with status effects such as Lockdown, Suppression or EMP, giving the Shell a temporary window to shred the enemies. Alternatively Shell can ambush a point as a spearhead of an attack, which can rout the defenders for a continued assault.

When solo, using Shell's ability to rush large groups of distracted enemy robots is a valid strategy, as one can detonate to damage multiple enemies, while its ring of shields will protect it from fire from all sides.

However, while Shell is a powerful robot with a devastating ability, its low speed and ability cooldown make retreat near impossible, so it is recommended to choose your battles carefully. Furthermore, its ability in fact does only around half of Hellburner's Overload, but this can be balanced with superior firepower, shielding and the Revitalizing Intensifier on drones.

These are the recommended setups for the Shell:

The Shell is a powerful close-combat unit geared to take out enemies quickly, but with its shields can change to sustained combat if required. The ideal setup for the Shell involves high damage per second weapons such as Sonics, Flamethrowers/Toxin-type weapons, and Cryogenic rocket launchers for the 20% damage boost. Scald and Incinerator are also extremely proficient at taking down other Shells or even Titans. Thunders and Gusts can be used to take down other Shells considerably quickly provided they are decently leveled, and Calamity and Spark can take down enemies on the approach towards them, though this is not recommended since you lose lockdown often when brawling with Shell, and you will not be able to damage other Shells. Flamethrower and Acid type weapons can destroy enemies up close as it can bypass all shields on shells, making this the bess counter to other shells and robots in general. 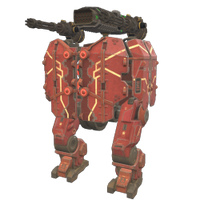 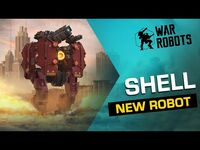