The Sharanga is a Titan with 3 Alpha hardpoints.

The Sharanga's primary ability is called Full Power, which increases the damage output from its three Alpha weapons by 40% for 3 seconds. The ability has a 10 second cool down.

The Sharanga's secondary ability is Phase Exile. It slows down the enemy by info needed%, makes them invulnerable to damage but they cannot fire or capture beacons, in a manner similar to Phase Shift. The difference between a normal Phase Shift and Phase Exile is the latter is forced upon the enemy and slows down their movement, with the former being activated on one's own will. This allows players to mitigate any attack an enemy might launch since enemies cannot attack in Phase Exile. It also helps in capturing beacons as enemies cannot capture beacons or block the capture meter when in Phase Exile.

The Sharanga is a powerful Titan, boasting decent footspeed, above average health and immense firepower. As such, it's recommended to play the Sharanga as a sniper, but it can function extremely well as a mid-ranger or even a brawler if played carefully.

When acting as a sniper, the Sharanga relies on its footspeed to quickly get into a vantage point with aquedate cover, then begin to snipe enemies. Full Power is great for obliterating enemies in a single salvo provided they don't get into cover, while Phase Exile can slow down enemies that are too close for comfort, giving the Sharanga some time to find cover with its decent groundspeed. A good sniper Sharanga commander will always target enemies attempting to attack your teammates, especially if that teammate happens to be in an extremely dire situation. However, if an enemy gets within a 300m range of the Sharanga, the commander should target that enemy instead, using Full Power first to attempt to obliterate it, and if they somehow survive the commander can use Phase Exile to buy themselves some time to reload their weapons, find cover and recharge Full Power.

As a mid-ranger, due to vantage points making the Sharanga extremely vulnerable (most mid-range weapons will deal severe damage to the Sharanga at this range, especially as it has no defensive mechanisms), the commander should attempt to find a building that allows the Sharanga to covershoot at enemies. Full Power can be used disposably, however when it's active the commander should still try to prioritize enemies that are strategically important for the enemy team (for example, healing robots or robots with energy shields) in order to maximize damage to the enemy's team effort. Phase Exile can be used on enemies that are teaming up against one of your teammates, however if an enemy is getting too close for comfort it's reccommended to save Phase Exile in case they happen to attempt to launch an ambush on you. If there's a flying enemy coming towards you, it's essential that you should Phase Exile them if you have the ability recharged, as the mentioned enemy can do severe damage to the covershooting Sharanga if left unchecked.

Major WIP, do not touch 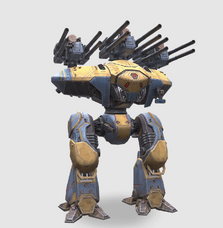 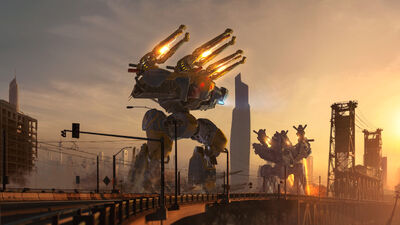