“…A new milestone in the history of teleporting robot saboteurs. An aggressive robot created by Yan-di Ventures, capable of instantly teleporting behind an enemy, causing panic and destruction, and returning to safety just as quickly…” – in-game description

The Scorpion is a medium robot with 2 medium and 1 light hardpoint.

Scorpion's ability is called Backstab. When activated the robot teleports behind an enemy, activates resistance, gains a 37% speed boost (83 km/h at max speed) and starts firing a built in weapon that deals damage over time (DOT effect). If the ability is activated a second time the robot will teleport back to the point where it originally activated its ability.

The Scorpion is intended to quickly ambush and eliminate enemies and is thus best suited for weapons with high burst Damage Per Second (DPS) in a short amount of time, such as the Cryo and Rime setups, Orkan and Pinata, Storm and Gust, and Havoc and Scatter. Weapons that work well after teleporting away from the target are Igniter and Blaze, Atomizer and Quarker and Spark and Scourge.

The Scorpion struggles in prolonged combat due to its relatively low health and average firepower, so pilots must be careful to minimize time spent exposed outside of resistance and cover. To increase the Scorpion's efficiency, pilots should memorize the ability cooldowns of different robots, utilizing Scorpion's Backstab while their target is still vulnerable.

For the most tactical teleportation, Scorpion pilots should prioritize targets. Picking hit-and-run targets that have just unloaded their weapons and have used their ability are easy prey for the Scorpion. Good examples include Ares, Ao Jun, Ao Guang, Leech, Hades, and Hawk, as their ability reloads and 'Gun-and-run' playstyles can both be exploited by the Scorpion's Backstab ability. Focusing on medic robots such as Mender, Demeter, Nightingale and support / team protection-based robots such as Fujin and Bulwark will also help your team effort as the enemy's repairing capability or protection will be severely damage due to the lack of robots which can either heal or provide the enemy with shields.

Some effective setups for the Scorpion are:

The Scorpion can be an frustrating robot to play against. When enabled with the cloaking provided by the Ash Skagard pilot, the unique advantages provided by teleport, increased defence points and the large damage output make it an extremely difficult to counter. Most opponents are forced to immediately use their own robot's ability to counter a Scorpion attack, since it is very difficult to quickly determine the threat they're facing.

The element of surprise is always on the side of the Scorpion. Due to its agility, unique ability and constant advantage over other bots, Scorpion dominates weaker opponents and cripples tanks and unsuspecting players. 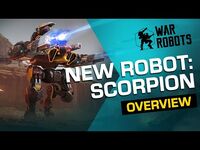 Scorpion getting a Living Legend 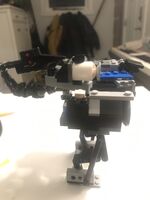 Lego Scorpion Armed with havoc and scatter made by ZzvViruSszZ (Side) 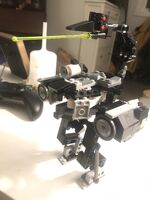 Lego Scorpion Armed with havoc and scatter made by ZzvViruSszZ(front)