Rome is a map that was released in version 4.0.

This map is based on a real (and very famous) place. Those pilots who know Rome quite well will definitely feel at home: if you look at Google Maps, you will even see the same buildings or scheme of roads! -in-game description.

Rome is a medium-sized map, small in comparison to Yamantau, Springfield, Dreadnought and the like, but is still relatively open and flat.  It is semi-symmetrical, with four beacons equidistant from the central Arena beacon.  Each beacon is surrounded by light cover, but virtually all of the map is vulnerable to indirect fire weapons such as homing missiles and artillery.  Each team is practically given a beacon that they spawn right next to, with three remaining to contest over. The three beacons are known by the callouts Town, Arena, and Platform.

The Arena is hotly contested as it is situated directly in the middle of the map.  Beacon runners usually head here first, as the massive amphitheater encircling the beacon is excellent cover from mid-range and sniper builds, which usually perform well on this map due to large sections of it lacking decent cover.

The Town is a very dangerous beacon to go for because it is very easy for DB, RDB, Shotgun, and leadhose builds to hide among the multitude of buildings, but can be an excellent flanking route to attack enemies who are focusing on Arena.

The Platform is probably the least contested beacon on the map, and is frequented by Artillery/Sniper builds hoping to escape spawn raiders. It is also an excellent way to gain a foothold against foes entrenched in Arena. 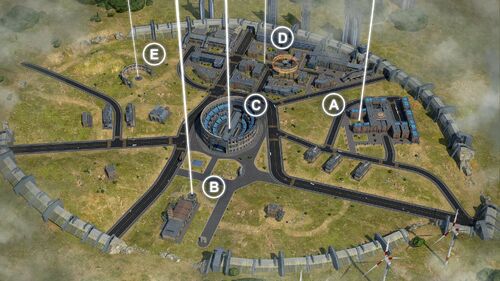 Retrieved from "https://warrobots.fandom.com/wiki/Rome?oldid=266245"
Community content is available under CC-BY-SA unless otherwise noted.