The Rogatka is a medium robot with 2 medium hardpoints.

This Rogatka has the Jump ability which is capable of jumping slightly higher than the Cossack but covers a little less distance and has a longer ability cooldown.

Due to having 2 medium hardpoints, a maximum health pool of 150,000 hitpoints, and a maximum speed of 60 km/h the Rogatka has the same firepower, health, and speed as the Kumiho. The differences in how to use them tactically lie in their abilities, as the Kumiho can Dash in and out of cover but the Rogatka can use its Jump to avoid rockets and clear obstacles.

The Rogatka is highly agile and fills the beacon runner role extremely well in the lower leagues. It can capture beacons then jump safely into cover, taking minimal to no damage. It is more agile than most other Tier 1 robots and and due to its high ground speed can even outrun several Tier 2s.

The Rogatka can also engage in flanking manoeuvres, and is one of the best-equipped Tier 1 robots to be able to do so. Its high speed, high HP, decent firepower and mobility-enhancing Jump ability allow it to conduct assaults on unprepared robots without the assistance of any allies.

In addition to beacon capping the Rogatka performs well as a skirmisher and an ambusher, using its Jump to either dodge enemy fire or surprise a target. For ambushing a high burst Damage Per Second (DPS) load out is recommended. Jump can be used to suddenly appear next to the opponent and to unload the Rogatka's weapons, and then quickly leap out again once the salvo completes, if the enemy has not been shredded to pieces yet. Repeating this a number of times is enough to severely damage or destroy any target the Rogatka's commander has set their eyes on.

For sustained DPS as a skirmisher long-unload weapons are a good choice. The Rogatka is also well-geared for this, as its high health, agility and firepower allow it to stay in the ring for a long time, using its speed and ability to evade enemy fire. The Rogatka can come out as the winner of most 1v1 duels with Tier 1 robots.

A useful trick while skirmishing with the Rogatka is to Jump straight over the enemy robot. They will be unable to target you while you are above them and they will also have to rotate their torso 180 degrees, which is a process that can buy the Rogatka one or two seconds of time.

Counterplay: The Rogatka is one of the strongest bots in Tier 1, but its main gimmick is its lightning speed and quick-reloading Jump. As such, weapons with the lock-on attribute (especially ones with the homing attribute in addition) can severely undermine the Rogatka as neither its speed nor Jump will help evade the shots. Circling the Rogatka and using movement-enhancing abilities whenever possible can help in stopping it from locking on to you, but facehugging the Rogatka does not work as well as with other medium robots as the Rogatka's hardpoints are placed much farther back on its hull then its nose.

Threat Measure: The Rogatka is one of the most versatile robots in the entire Tier, lacking in none of the three basic factors of HP, speed and firepower. Therefore, if commanded correctly, the Rogatka is an extremely high threat as a Tier 1 robot and can very well be used in Tier 2 gameplay.

Downgrades: Cossack
The Cossack is slightly slower, much less durable and has half the firepower of the Rogatka, proving better only in Jump cooldown, but the Cossack's Jump is much smaller than that of the Rogatka anyways.

Alternatives: Kumiho (T2)
The Kumiho and the Rogatka are extremely similar. While the Kumiho does have slightly more HP, they have the exact same speed, exact same firepower and mobility-enhancing abilities with quick cooldowns.

Tiered-up upgrades: Griffin, Hover
The Griffin could be considered by some as an alternative to the Rogatka, but it is generally superior to it. It adds an additional 2 light weapons, considerably more health and a much longer & higher Jump, but falls short of the Rogatka in terms of speed and Jump cooldown. The Hover is however superior to the Rogatka in every aspect, with an additional light hardpoint, more health, more speed and a higher jump with the ability to drift across the map as well. Its Glide cooldown is the same as the Rogatka's Jump, but the fuel takes much longer to fully recharge.

These setups are recommended for the Rogatka:

Good weapon choices for the Rogatka include sustained DPS such as the Punisher T or Tarans, or using high burst DPS such as Orkans, Cryos, or Vortexes. Vortexes can be especially devastating if fired at the apex of the Rogatka's jump, giving the Vortex missiles a higher trajectory angle which could hit enemy robots behind cover. 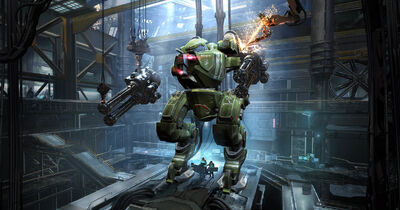