A robot is a large, armed, walking war machine, which players use to battle for dominance over a battlefield. Each robot belongs to one of three weight classes; light, medium or heavy. Robots come in a multitude of configurations varying in size, shape, speed, durability, special active or built-in abilities, and more. Most of these robots have confirmed Factions, which are the group which these robots belong to (according to official lore).

Most robots require the player to reach a certain level before the robots become available for purchase. To reach a higher level, the player needs to gain experience.

^ + - * & Next to a Max Speed value: speed can be affected by abilities, respectively

Note that some robots may have more than one symbol, indicating different types of speed increase; they are in the order of appearance, for example Phantom would first speed up (+) then be able to teleport (*).

All speed values are max base speed displayed in-game, and does not include speed increased by Modules, Pilot skills, Boosters, and Khepri links.

Examples of how abilities may affect robots' speed:

* Next to a Max HP value (HP can be increased or decreased, with ability use):

* Next to an energy shield value:

* Next to a class value: 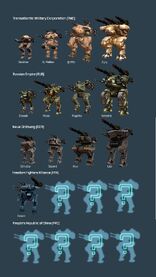