“…Tough yet rather mobile, thanks to its special ability. This robot possesses 2 medium and 2 light slots to offer excellent customization possibilities…” – in-game description

The Raven is a medium robot with 2 medium and 2 light hardpoints. It is unofficially classified as a heavy robot based on wiki criteria.

The Raven has a unique Jump ability called Double Jump.  The Raven can store two charges (each with a 20-second cooldown), giving the player a choice to either jump, land, then jump again, or use the second stored jump in mid-air. However, the user must wait for about two seconds after the first jump before the second jump is available. When using the jump in mid-air the player can choose the direction which can be very useful in dodging enemy fire.  When the ability is activated the Raven gets +20% damage in firepower for 8 seconds.

The Raven is similar to the Griffin due to its hardpoint layout and frame, however a key difference between the two is the Raven's Double Jump ability. The Double Jump gives the Raven a second jump making the bot very agile.  The Raven can use a second jump in mid-air to dodge enemy fire or to return safely to cover or out of enemy weapons' range after engaging a target.  The other difference between the Raven and the Griffin is the +20% boost to damage for 8 seconds once a jump is made, increasing firepower.

Due to the Raven’s boost in firepower when jumping, being on the offensive when jumping in or even out is key to maximizing damage output. Against another robot with the same or roughly same firepower, such as the Tyr or Hover, this 20% damage buff can make all the difference on who survives the engagement.

The Raven is good for hit-and-run or ambush tactics, but not for sustained close-range engagement.  Because of the Double Jump ability some players use the Raven as a beacon capper since it can quickly move over a large area. The Raven is best equipped with, mid-range weapon loadouts, such as, Tulumbas / Pin or Spark / Scourge. The Raven is a moderate threat in mid-high leagues.

Some effective setups for the Raven are: 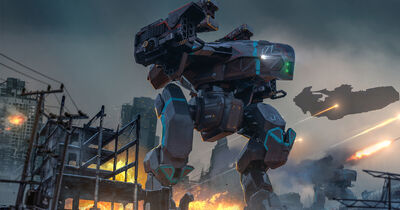 Raven
Add a photo to this gallery

Retrieved from "https://warrobots.fandom.com/wiki/Raven?oldid=343815"
Community content is available under CC-BY-SA unless otherwise noted.