The Raijin is a quadrupedal heavy robot with 2 heavy hardpoints.

The Raijin's ability is called Bastion Mode. When activated the Raijin raises its two shields (which resemble a pair of Ecus) while elevating its torso and gaining a 30% damage increase for each weapon. This provides both protection and a better field-of-view to fire its weapons at the cost of the Raijin being unable to move. (It can still move its torso).

If enough damage is dealt to the physical shields they will eventually break, albeit the separate health pools usually cause one to break before the other. The shields partially protect Raijin from explosives, but do nothing against sideways and vertical impacts from homing missiles such as Spirals and Hydras.

The Raijin is the third most durable robot in the game with a health pool of 250,000 hit points (HP) at level 12, surpassing the Leo at 244,000 HP but short of the Invader and the Ravana (268,730 HP). Its pair of physical shields are extremely durable, making the Raijin the robot with the highest health pool in the game when combining the durability of both shields.

The Bastion ability and large health pool allows the Raijin to provide excellent area defense and to hold beacons. The Raijin has below average ground speed so popular weapon loadouts in the lower leagues are long-range weapons such as the Nashorn or Trebuchet. In the middle leagues the Raijin is used for mid-range (e.g with Dragoons or Zeuses) fire support or close-range (e.g with Avengers or Embers) defensive engagements.

The Raijin's large size and mediocre speed cause it to suffer against more mobile and heavily armed opponents, such as the Leech, and the fact that Bastion Mode leaves it immobile adds to its vulnerability.

Like its quadruped counterparts, the Raijin has special maneuvering characteristics. Quadruped robots do not suffer from landing lag when they fall from a high place whereas other bots are seen pausing as they absorb the shock. Quadruped robots are able to change directions rapidly since their legs allow them to move in any direction without turning, whereas other robots must rotate their lower bodies to the new direction.

One of the most distinctive characteristics of the Rajin is its ability to climb and reach locations even jumping robots such as the Cossack, Griffin, Inquisitor, Spectre, and Rogatka cannot. However, this robot cannot climb 90-degree slopes or walls but the Raijin's descent is significantly slowed down when "hugging" the wall surface.

When engaging a Raijin it is important to consider weapon damage types. A bot equipped with accurate Energy weapons will be at a disadvantage when facing a Raijin head on due to the Raijin's physical shields providing protection. Explosive weapons, however, can partially bypass the shields and are generally more effective at destroying Raijins. Weapons with cones of fire can be effective due to Raijin's relatively large frame and hit-box, as substantially more weapon particles will hit the Raijin that would miss against a normal bot, maximizing damage.

Note: A particular advantage of the pilot activating Raijin's Bastion Mode is that the raising of the shields moves the enemy's target lock above the robot and its shields before they are fully raised. This causes the enemy robot to miss a few of its shots.

Some effective builds for the Raijin are:

Note: Although the Avenger has a range of 500m, it is most effective when used as a close-range weapon (due to bullet spread). Due to its outstandingly high damage however, it can fired at 500m and below whilst approaching the enemy robot(s). 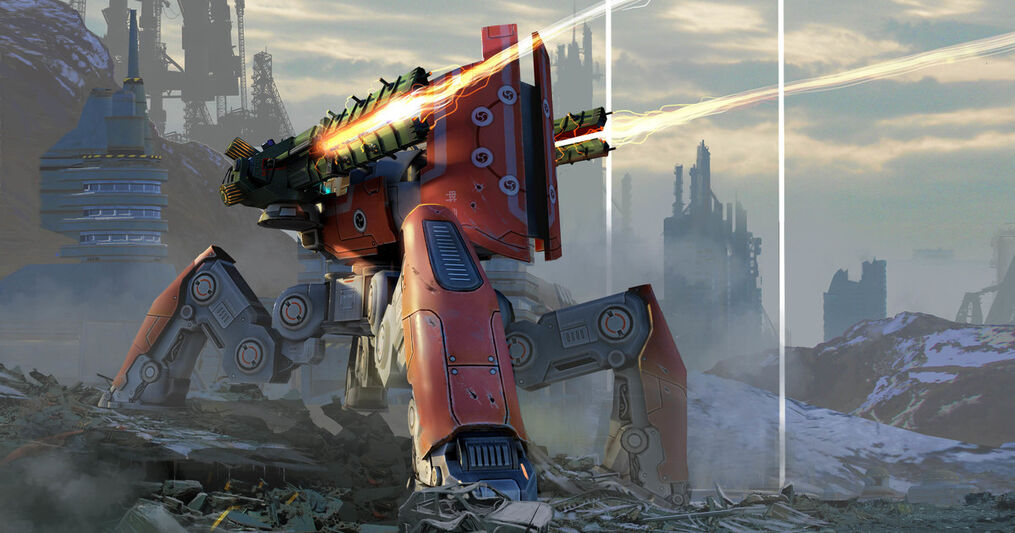 Raijin is the one of the bots from the Japanese faction