The Pursuer is a medium robot with 3 light hardpoints. It is unofficially classified as a light robot based on wiki criteria.

The Pursuer's ability is called Hunt which when activated gives Pursuer stealth and a 33% speed increase (88 km/h) for 10 seconds.

The Pursuer has the same speed and cloaking ability as the Stalker and should be piloted in a similar manner, using hit-and-run and ambush tactics, along with flanking and capturing beacons. Certain combinations of modules and pilot skills can further enhance the Pursuer's capability by allowing it to escape dangerous situations (i.e. Phase Shift) or provide a one-time extra ability charge (Deft Survivor).

The Pursuer's survivability isn't particularly effective if the enemy has the Quantum Radar module, so the commander should always take extra measures to ensure the longest possible survival time. Last Stand and Phase Shift are advised for extended survivability despite the Pursuer's Hunt ability, as an extra layer of defense should the enemy come with Quantum Radar. Cloaking Unit is not advised as the main purpose of Pursuer's modules are to provide emergency defense if the enemy can bypass the Hunt ability's stealth, and Cloaking Unit's literal only use is to provide the user with stealth.

If Pursuer is flanking, then there are major factors to take into account: the status of the battlefield and the presence of enemy snipers. If there is a major battle going on at the center beacon or any area that does not correspond with the Pursuer's flanking route, then it is advised to go on with the procedure. However, be aware of enemy snipers even if factor 1 is checked, as they will likely be at a vantage point which they can clearly see your robot from. While flanking, be sure not to use stealth unless an enemy turns your way, as you will likely need it when you actually join the battle you were flanking for. However, it is probably a good idea to activate Hunt if an enemy seems to be watching you, as you will have a chance of not being noticed if they only see your nametag for a split-second.

The Pursuer is similar to the Stalker when it activates its ability but is far more dangerous since it has three light hardpoints instead of two, as well as much longer stealth and a speed boost. When equipped with high burst DPS weapons the Pursuer can close in on a target, inflict significant damage, then escape within the 10 second duration of its ability. In the middle leagues the Pursuer is a high threat, but in the higher leagues experienced pilots and bots equipped with Quantum Radar make the Pursuer a moderate threat. Furthermore, robots such as Fenrir, Orochi and Shell can simply outlast the mediocre firepower output by Pursuer's mere three light weapons and destroy it with ease.

Pursuer is a cheaper alternative to the better and more common Loki.

These setups are recommended for the Pursuer:

There are multiple effective builds for the Pursuer. Ones that deal high burst DPS is recommended to compliment the Pursuer's hit-and-run tactics. Gusts, Halos, Pinatas, Shredders, and Rimes deal considerable burst damage that quickly cripples or eliminates enemies during the Pursuer's Hunt ability activation. 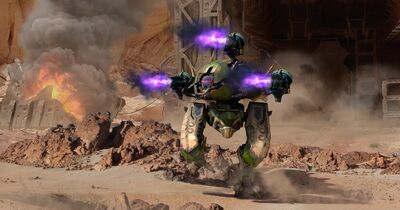