The Orochi is a Medium Robot with 2x heavy hardpoints.

Orochi's ability is named Viper Strike. Upon activation of the ability, Orochi switches from walking to rolling on wheels mounted in its feet, giving it a sudden dash forward and increasing its speed by 100% for the rest of the ability duration while also activating stealth, preventing enemies from being able to target it automatically. While Viper Strike is active, Orochi activates its built-in missile launcher, which inflicts corrosion damage on enemies and is able to pathfind its way past obstacles. It's range is 350 m..

Viper Strike is a charge-based ability, meaning using the ability will only consume one 'charge'. However, each of these 'charges' have their individual reloads. Viper Strike is active for 5 seconds per charge and the Orochi can store two charges. Each charge has an 18 second cooldown phase, which begins upon activation of the charge instead of after the charge is complete. Unlike certain robots, Viper Strike's charges cannot be used at the same time.

The Orochi is a powerful ambush robot. Due to its two ability charges, Orochi can engage enemies for a considerable amount of time with its two heavy weapons. However, due to its extremely weak health pool, being caught in the open without your ability ready usually results in death.

Due to its low frame, stealth, and high speed, the Orochi functions well as an unnoticed beacon capper, an infiltrator, a saboteur, an assassin, and a hit-and-run robot, making it extremely useful at causing chaos. However, due to its extremely low health pool, the Orochi is unsuitable for prolonged skirmishes unless acting as a suicide-charger robot.

When functioning as a beacon capper, Orochi relies on its ability to get from A to B with its speed boost, as well as making it much harder to notice thanks to its stealth. When using the Orochi as a beacon capper, the pilot should always have one charge of Viper Strike on standby as a panic button in case you think an enemy has spotted you, but the other should be used as often as possible for its additional burst of speed and speed boost. For this role, Nitro Unit is an extremely useful module, as its increased speed boost allows Orochi to rush beacons easier, but Battle Born and Last Stand also come in extremely handy, as they allow the Orochi to tank out more damage for certain amounts of time, in which time it can usually recharge its ability and drive away. For the same reason, Phase Shift is the ideal active module for this role.

As an infiltrator, Orochi should be used to wreak havoc between the enemy lines, with its low frame and stealth making it difficult to hit. For this strategy, sustained-damage weapons should be employed to deal maximum damage, as the Orochi has a decent period of time before having to leave the arena. When functioning as an infiltrator, Orochi should use Viper Strike once to get out of cover and deal damage, and when that expires, the Orochi should use its next charge to get back into cover, where it can reload its weaponry and its abilities, as well as using any Modules it needs to replenish itself. For this role. Nuclear Amplifier and Thermonuclear Reactor are great choices to maximize damage output, while Balanced Unit is a viable choice for any commander willing to play it safe. For active modules, Advanced Repair Unit is a great choice as it allows the Orochi to heal itself in-between engagements, while Phase Shift is a great panic button in case the Orochi is detected by Quantum Radar and the like. Jump Unit can even be used to leap around, making sure that even blind shots won't be able to target the Orochi while sabotaging. The Overdrive Unit is not advised as a passive Module, as it requires the Orochi to take a certain amount of durability damage to activate which the commander should not risk doing.

As a saboteur, Orochi focuses on contesting beacon control as well as drawing fire away from snipers and mid-rangers on your team. To do this, the Orochi ideally needs cover to dash to when its ability is close to expiring, but that cover should be near an enemy hotspot or beacon so the Orochi can maximize time destroying enemies and contesting beacons while minimizing the time needed to get to the location. For this role, Nitro Unit is good to speed past the enemies to rush a beacon, while Thermonuclear Reactor and Nuclear Amplifier are good modules to deal more damage. Overdrive Unit is not recommended as by the time the Overdrive threshold is reached, the Nitro threshold will most likely have expired and the Orochi will only have one of two Module buffs active at a time. As the Orochi will most likely not take much damage in this role, Shieldbreaker and Quantum Radar are better advised than Advanced Repair Unit or Phase Shift, so the Orochi can cause more havoc in the enemy lines with the former two than the latter two, which focus more on preventing damage or negating damage which the Orochi probably will not take.

These setups are effective for Orochi:

Fires nine missiles (3 at a time) within a 5 second span at a maximum range of 350m. If "Ghost" (legendary pilot) is equipped, rate of fire can be increased by 100%. The built-in missles also inflict corrosion(DoT) damage upon striking a target. Those missiles can be used to kill nearly dead robots without needing line of sight. The missiles fly quite quickly, and barely ever miss. 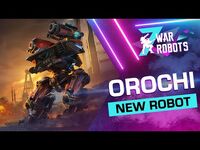