The Nightingale is a medium robot with 1 light and 2 medium hardpoints.

The Nightingale's ability is named Air Support. Upon activation the Nightingale takes flight in stealth mode, gaining a 10% speed boost (60.5 km/h at max speed) along with the ability to heal ally robots below it in a 75m diameter radius directly beneth the robot. During flight, the Nightingale's weapons fold back and are temporarily unavailable. However, the bot activates a built-in suppression weapon (similar to the Rayker) that automatically fires at manually targeted enemies up to 500 meters away. The suppression gun fires one beam every 1.5 seconds and deals very low damage to enemies, however any target hit will have their weapon damage lowered by 70% for five seconds (non-cumlative).

The Nightingale's healing radiates downward from the bot in a fashion similar to a cone, different from the Weyland, Mender, Tyr and Nodens. Any ally within the radius of the Nightingale's cone (along with the Nightingale itself, as well as bots flying above it) will be healed at a set rate. The Nightingale cannot heal through roofs (like the one on Dreadnought), although the green aura does show through roofs (creating a confuning visual for those within the cone expecting to recieve healing). Nightingale can fly for up to 16 seconds, but the flight can be terminated at any time by pressing the ability button a second time. Cool down is for 18 seconds.

The Nightingale is a great support bot with its ability to heal allies and suppress enemies. The Nightingale also performs well as an ambusher and skirmisher.

Some commanders use Nightingale as the opening bot to take advantage of the healing and attack power at the beginning of the battle to quickly charge the Titan meter. This gives the commander more options as to when to drop the Titan into the battle, either early on in the game to push further into enemy territory, or later in the game to counter enemy Titans. Using Nightingale mid to late battle is also effective to support allies pushing or defending beacons, to suppress Titans, and to cover ground quickly for ambushing targets or turning beacons. However, due to the presence of Titans late-game the Nightingale's fairly average firepower won't be able to do much damage. Regardless of the stage of the battle, the commander should always stick with robots vital for your success (support bots like Rayker or Typhon or tanks like Bulwark) and restore any lost HP and suppress enemies trying to eliminate them.

Thanks to the Nightingale's suppression it can afford to remain flying and take fire from enemies using Quantum Radar during its ability, so long as it has managed to suppress the targeted enemy. This should also be exploited when any enemies are targeting other stealthed allies, such as the Ao Jun. However, there are rare cases when the enemy has both a physical, Absorber or Aegis barrier or is cloaked and has Quantum Radar at the same time. In this case, provided the enemy has sufficient firepower to damage you noticeably, it is recommended to terminate flight early and land somewhere in cover where it will be harder for the enemy to hit you as you will not be able to suppress them due to their cloak/shields.

If functioning as an ambusher it is advised to have quick-unload weapons like the Cryo & Rime, Orkan & Pinata and Havoc & Scatter so you can unload and engage stealth as quickly as possible, taking minimal damage. It requires quick timing to be effective and it isn't the most useful way to exploit Nightingale's abilities. For this role, useage of Phase Shift and Last Stand are effective as they can provide a failsafe if you accidentally engage in combat without your ability at the ready. Other active modules for consideration are Death Mark to maximize damage output and Shieldbreaker or Quantum Radar to destroy enemies that deploy shields/stealth when you engage with them. Other passive modules for consideration are Thermonuclear Reactor or Overdrive Unit to maximize firepower (when using the latter the commander must be especially careful when the Overdrive Threshold is activated) or Balanced Unit to provide both a damage boost and some extra defence in case of emergency.

As a skirmisher the Nightingale relies on its fairly-elevated hardpoint integrity and nearby cover to function well. Using cover it is possible for the Nightingale to covershoot over buildings while taking minimum damage in return. If the enemy somehow gains an elevated angle by any means, it is recommended to activate Air Support at once to activate stealth and to suppress them so they cannot use their vantage point against any of your other teammates. In this role, Overdrive Unit is useful to maximize damage (the Nightingale will inevitably sustain some damage from splash weapons or robots with an elevated hardpoint integrity so Thermonuclear Reactor is not advised) and Heavy Armor Kit to improve its defence. Death Mark can help maximize damage output when skirmishing and Jump Unit can allow the Nightingale to hop behind another building while still allowing the robot to fire at the enemy.

The Nightingale's built-in weapon system fires up to 10 beams per ability duration (one shot every 1.8 seconds), with a maximum range of 500 meters.

Each beam is guaranteed to suppress the enemy's weapons. It is worth noting that the beams can bypass Ancile shields, but not physical shields. 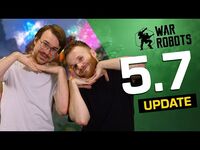 Nightingales as seen in one of Update 6.0's official posters