The Natasha is a heavy robot with 2 heavy and 2 light hardpoints. (Natasha 3D Model)

Natasha can be used for a variety of playing styles in the lower- and mid-leagues. The Natasha's slow speed and large size make it an inefficient brawler, however with two heavy and two light hardpoints the sheer firepower can overcome its weaknesses in close-range engagement. The most popular use of the Natasha is mid-range and long-range support fire using long-range sniping weapons like the Trebuchet, Arbalest, Dragoons and Molots.

Sharing exactly the same durability and speed as the Fury, Natasha is a cheaper alternative. Depending on the setup the Natasha can yield more firepower than the Fury. For example, a Thunder/Gust Natasha setup has more firepower than a triple Thunder Fury.

The Natasha has a large amount of firepower, outgunning many of the bots it will face in the lower leagues. Due to its slow speed and large frame Natasha pilots should make maximum use of cover.

One of the Natasha's main advantages (along with the Leo) is its cost-effectiveness and reliability. Natasha is viable in Diamond and Expert leagues especially if equipped with premier weapons such as the Calamity and Spark. Both the Natasha and the Leo are eventually outgunned in the higher leagues but they are far cheaper to upgrade, help pilots learn basic tactics, and ease the transition into mid-league play.

Natasha puts out significant firepower with 2 heavy hardpoints and 2 light hardpoints. Weapon load-outs like Avengers/Punishers or Exodus/Piñatas put out a tremendous amount of Damage Per Second (DPS). In the lower leagues, the Natasha is considered to be a high threat due to its firepower.

These setups are effective with the Natasha:

A common long-range support build in the lower-leagues for the Natasha is Trebuchets / Gekkos, as these weapons both have the same range and damage type even though they have different firing mechanics. Players can use Arbalests instead of Gekkos since the Arbalest has better synergy with the Trebuchet. For kinetic options Tempest / Molot is popular. Zenit / Noricum can provide long-range suppression and harassment.

For close-range engagement Thunder / Pinata or Thunder / Gust puts out high burst Damage Per Second. An alternative is to use Avenger / Punisher.

Overall, the Natasha is a versatile robot best suited for mid-range nad long-range engagement. Its large frame and slow speed limits its combat capabilities in the middle-leagues. 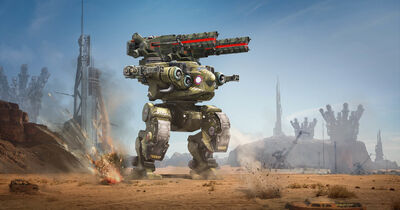 Natasha equipped with Trebs and Gekko 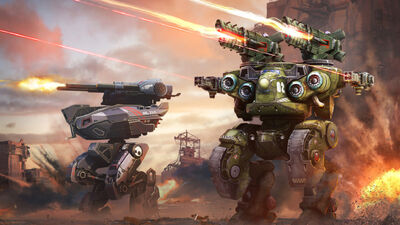