The Minos is a Titan with 3 Beta hardpoints.

The Minos' primary ability is named Charge. When activated, the Minos uses rocket boosters hidden among its hull plating to increase its speed by info needed% for info needed seconds. While charging the Minos' hull-turning ability is reduced. While the Minos' dramatic speed boost is taking place, the socket over the generator on its back unfolds creating a huge magnetic field within a 100-meter radius around the Minos. Any enemy who is inside this magnetic field will be pushed back and take damage, however other Titans will not be pushed back (but they will take the damage all the same.)

The Minos' secondary ability is named Reflector. Upon activation of this ability, the Minos deploys a special Reflector Shield around its hull which will reduce damage by 50% at base level and return 20% of the original damage that would've been dealt to Minos to the enemy who dealt it. The Reflector Shield's damage resistance cannot be mitigated by Defense Mitigation, and does not accumulate any Drone effects that rely on damage resistance.

The Minos is a powerful Titan, especially in close-range engagement. It is recommended to mount Cyclones or Squalls on the Minos to deal high damage at close range. The commander should use Charge to rush beacons as the speed boost provided by it not only allows Minos to reach the beacon quickly, but also allows it to clear out any possible resistance in the beacon's area.

Minos can use its Charge ability to clear out an area, and sometimes knock an enemy into an environmental hazard. This allows the Minos to rid a certain area of enemy resistance and should be used to lead a charge into a chokepoint. Having supporting allies, especially Typhon thanks to its ability to prevent an enemy from using its ability or an active module from saving themselves, is also useful as if they somehow survive then your allies' and your firepower can obliterate them.

Tactical useage of the Reflector shield is essential. By activating it you deploy an unmitigateable damage resistance for yourself and also channel a fixed amount of damage back to an enemy. This is useful when serving as a lead tank for allies since informed enemies will likely not open fire on you, and as such you can use your huge frame and hitbox to serve as a shield for allies behind you.

It is essential to know when to deploy the Minos. The Minos is more like a hit-and-run bot than a Titan, since it is vulnerable when it doesn't have its Reflector shield activated. In beacon games if it's important to hold a beacon, the Minos is great for clearing out bots, however if you drop the Minos too early and without team support, it might die or get significantly damaged by bots on the Red team, possibly creating a Titan mismatch toward the end of the battle. Therefore, just like with all Titans, it's better to spawn when you have a Nodens or healer on your side.

The Minos will win in a 1v1 against most other bots and some Titans depending on the situation. Knowing when to attack is key! So try to finish off targets, particularly Ao Mings low in health (or without support), or non-Shotgun Titans. Look for Titans engaged with other Titans so you can attack and save the Minos' abilities.

It's very important to save Minos' abilities. Don't use your Rush ability recklessly. Use one Rush to get a tactical advantage (i.e. hold a beacon / clear out bots, get behind an Arthur, or finish off an Ao Ming), and save at least one Rush ability to escape to cover or retreat out of range. It's vital to know WHEN to use the Reflector shield. For bots, use it when Hawks are hitting you, and be wary of Typhons (and to a lesser extent Cerberus for its Blackout). For Titans, it's mostly plasma Ao Mings and Titans with shotgun weapons (up close).

When commanding the Minos, you must be careful of your location on the map. Since Minos is vulnerable without its shield, try to always fight near cover. Be very careful when close to enemy spawn points. This is where saving that Charge ability is key! 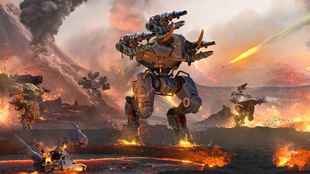 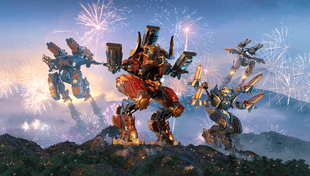 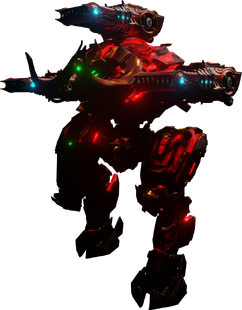 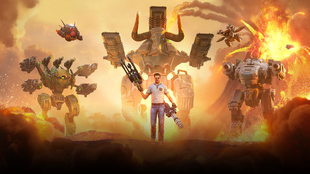 Minos armed with 3 Squalls as seen on the Serious Sam Event Poster.