The Mender is a medium robot with 1 medium and 2 light hardpoints.

The Mender's ability is called Support. The robot gains increased movement speed (33%), damage reduction (64%, 175 defense points), and emits 7 healing pulses at the beginning of ability activation. These healing pulses repair a fixed number of hit points (see table, the higher the robot's level the more hit points it can repair, the value is close to half of Mender's durability) to any number of allies located in the Mender's healing radius (the green circle surrounding the Mender), including itself. The ability lasts for 8 seconds and has a 15-second cooldown phase.

A robot's hit points can only be repaired up to 80% of any damage taken, so it is not possible to be fully repaired; however with the Legendary Pilot Marie Leclair, it is possible to repair grey structual damage, making Mender invulnerable if the damage it takes is slower than its repair capacity. This added with Mender's commendable speed and durability makes Mender a rather strong support robot viable in high leagues.

When not using its ability, Mender has above-average speed with a below-average health pool. That, coupled with relatively low firepower (one Medium and two Light hardpoints) makes Mender vulnerable to most bots. However, when Mender activates its ability it is very good for close-in engagement ("brawling") and supporting teammates on the front lines. The "Murder Turtle" can be a lifesaver, turning a bad situation around due to its ability to rapidly repair both allies and itself.

In each of its 7 repair pulses, the Mender repairs roughly 10% (per pulse) of its durability at max level (Level 12 Mark II). So in the first approximation, the Mender in support mode behaves roughly as having 70% higher durability than it has in reality. Together with the fact that it suffers only 30% damage (during the ability's duration), its durability (at max level) is roughly that of a robot with 2.8 times the Mender's hit point value. This can vary of course depending on when Mender receives damage while its ability is activated (since the repair pulses are released at the beginning and do not last for the entire duration).

Whereas some may view Mender as a brawler tank that is reliant on its ability, it in fact should always stay with one or more teammates to make the best use of its ability. Furthermore, its mediocre firepower of one medium and two lights deal near insignificant damage to robots such as Fenrir no matter how long it fires and would benefit from team support in a firefight.

Since the Mender is an excellent support bot for brawling, it's recommended to use close-range weapons with high damage per second (DPS) burst capability, with a decently large clip. The Sonic weapons are most likely the most effective choice as they have massive damage output and denies the enemy any healing, whereas the Mender can simply tank with its increased resistance and heal any scratches it receives via its 7 powerful healing pulses.

As for any robot with a special ability affecting its survivability (Pursuer, Inquisitor etc.), an important factor in evaluating the damage a setup can produce is the amount it can deal while the ability is active, since you will likely want to avoid being out in the open when the ability wears off.

One of the 8 healing robots(Mender, Demeter, Weyland, Nightingale, Tyr, Khepri, Nodens, and Heimdall), Mender is equipped with a medium and 2 light hardpoints, capable of doing moderate damage before having to retreat after the ability ends. It is considered a moderate threat in higher leagues, and a high threat in lower- and mid-leagues.

These setups are recommended for the Mender:

Note: Each slot type is filled with only one particular weapon. For example, if a robot has 3 lights all three of those slots are filled with Pinatas, as mixing weapons of the same slot type is not advisable. 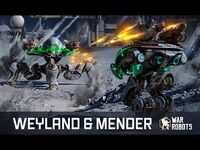 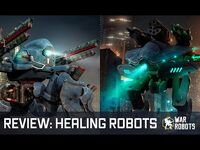