“…High-tech robot with serious firepower. Though Leech may seem fragile at first glance, it possesses a unique protection system designed by EvoLife engineers: the robot absorbs incoming damage and redirects it to the enemy…” – in-game description

The Leech is a medium robot with 4 medium hardpoints.

The Leech possesses high firepower and good speed but is frail in terms of durability. When the Leech activates its Repulse ability it gains 90% damage reduction and redirects 35% of received damage to any enemy within 500 meters it "links" for the duration of the 10-second ability.  If the enemy "linked" dies or moves outside of the 500 meter range, the link can be redirected onto separate enemies after a 1-second delay. Line-of-sight, obstacles (including shields), stealth, and distance (after the initial 500-meter linking range) do not affect an established link.

The Repulse ability is the first of its kind. It grants Leech both powerful defense and a unique offensive feature. The 90% damage reduction renders Leech virtually immune to harm (although corrosion will deal full damage and Titan weapons can bypass damage resistance with defense mitigation), which allows it to absorb enormous amounts of damage and redirect a fraction to a selected enemy robot. This is ideal against the Retribution abilities of the Pantheon robots (Ares, Nemesis, and Hades), as Repulse can withstand both initial weapon fire and damage from Retribution - while being able to direct it to an unfortunate enemy.

As powerful as Repulse is the 18-second cooldown means positioning and timing is important.  Similar to Ares, Leech's low base durability means certain death if caught in the open after the ability ends.  The use of the Phase Shift and Last Stand modules is a way to mitigate taking damage during its Repulse cool down period.

Leech is a moderate threat in the upper leagues.  Four medium weapons allow for huge damage per second (DPS), and its ability allows for unprecedented defensive and offensive performance.  A base speed of 45 km/h is also enough to outrun and outmaneuver most robots and its ability allows the Leech to counter Pantheon and Dragon bots.

The low base HP of the robot means it is unsuited for extended close-range fighting and holds poor survivability without its ability. Catching a Leech off-guard may prove to be the only way to take it out - provided its weapons don't shred you first.

These setups are recommended for the Leech:

Note: It is not recommended to use long range weaponry as you cannot use your ability on someone. 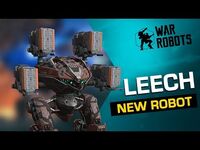