The Kumiho is a medium robot with 2 medium hardpoints.

The Dash ability gives it the capability of a quick burst of movement in any given direction. It shares this ability with the other two Korean robots, Haechi and Bulgasari, along with the Strider, and the Bolt. The Kumiho can store two Dash charges, and is tied with the Bolt for having the quickest ability cooldown of the five (5 seconds). It also is tied with the Strider for the fastest speed of all the Dash robots.

The Kumiho has the second least amount of firepower of the Korean dash bots, and is comparable to a Rogatka in terms of damage output, agility, and health. It is excellent at beacon capturing in lower- and mid-leagues due to covering ground quickly with its two dashes, and has enough firepower and evasiveness to hold onto the beacon long enough until support arrives.

The Kumiho also makes a good ambusher by using its ability to dash out of cover with one stored dash, unload a Cryo, Orkan, or Vortex burst/volley, and dash back into cover with the second stored dash. The combination of its impressive maximum speed of 60 km/h and the fast cooldown of its dashes makes this robot very hard to target.

When commanding the robot, it is advised to always keep at least one dash reloaded. This can be used to potentially counter burst-damage weapons like the Trebuchet's projectiles, as the Kumiho is rather fragile and will take major damage if it attempts to tank out the shots. A second reloaded Dash can be even more effective in dodging attacks, however it can be much more useful in other situations, such as attempting to retreat or launching an assault. Threat Measure Due to its relatively high health and fast speed it can be an excellent beacon capper. When combined with the jump unit it can jump very far (Jump and dash at the same time) and cap middle beacons.

These setups are recommended for the Kumiho:

Kumiho is commonly equipped with high damage per second (DPS) burst weapons, such as Storms, Orkans, or Cryos, as they complement the hit-and-run style very well. Tarans are good for attacking robots with energy shields, and Scourges go well with Kumiho's ability to quickly close in on a target, allowing it to get the maximum amount of damage from the weapons. 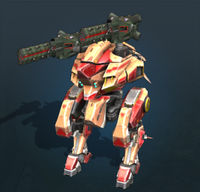 Kumiho armed with Trebuchets as part of a 2018 skirmish