The Kid is a Titan with 1 Alpha and 2 Beta hardpoints, but may only use the Alpha weapon when in Full Action.

The Kid's ability is called Full Action. When activated it deploys the Alpha weapon and gains damage resistance for a limited time of 10 seconds.

The Kid also has the Stove ability that makes a ring of fire around the Kid that ignores all shields, dealing damage to any enemy bot inside the radius. Unlike the flamethrower weapons, Stove bypasses all shields ( Energy, Aegis and Absorber). This is useful when engaging multiple bots at close range, and when dealing with bots using stealth or hiding behind structures.

The Kid is one of the three Titans released with the 5.6 update. (Nodens added in a later update 6.0.0)

Being the first Titan obtained, the Kid is meant to get the player acquainted to Titan mechanics. It has high durability (the third highest among the Titans below Sharanga and Luchador), but no shielding or special movement abilities.

A recommended strategy for Kid is to utilize cover and attack the enemy by using corner shooting. If possibly, only engage other Titans after activating Full Action ability.

Despite the Kid's high durability, it is vulnerable when its Full Action ability wears off. Therefore it's recommended to pair with a healer bot (Weyland, Nightingale, Demeter, and Mender, or Nodens.

The Stove is very effective at removing bots "hugging" the Kid (making it difficult to aim the Kid's weapons at such an extreme angle) and disposing of stealth robots. The large radius of the Stove can hit enemies underneath it (examples on Moon and Carrier) and flying bots above it as long as they are in a 100 meter radius. 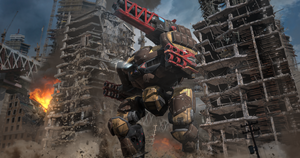 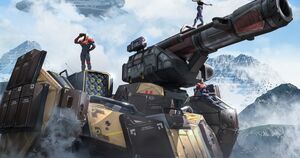