The Inquisitor is a medium robot with 1 heavy and 2 medium hardpoints. It is unofficially classified as a heavy robot based on wiki criteria.

The Inquisitor's unusual and unique ability is called Descend, and blends jump and stealth. When activated Inquisitor deals punishing attacks on enemies while cloaked in the air (and for five seconds after it lands). The ability has an 18 second cooldown.

In general, Inquisitor is played as a mix between a Lancelot and a Spectre, forcing opponents to exchange an initial salvo then activating Inquisitor's Descend ability to gain a good firing angle while also landing close to cover. Ideally the landing spot will protect the Inquisitor from other enemies lines of fire while still allowing engagement of the Inquisitor's primary target.

Due to the 18 second cooldown, it is important to carefully choose when to use the ability. Commanders should also be aware of their surroundings when jumping to avoid getting caught on obstacles, or jumping onto elevated ground (compared to the Inquisitor’s jumping surface). This is because getting snagged on an obstacle or landing on high ground will result in the Inquisitor’s 5-second landing stealth duration being triggered unnecessarily early, thus the commander will not be exploiting its infinite stealth in the air, and has to wait another 18 seconds for a second Descend.

Inquisitor has above average hit points and durability, and with its two medium and one heavy hardpoints it can effectively brawl in most circumstances on the battlefield. Inquisitors corner shoot extremely well, so if the enemy isn’t using weapons with splash damage an Inquisitor pilot can attack its target with low risk of receiving damage. The Inquisitor's jump distance is roughly 100m so is is also good as an ambusher, bringing "death from above."

The Inquisitor's ground speed is relatively slow so it's recommended to stay close to allies as they provide cover and additional firepower. Its size can also act as double-edged sword, as it is tall enough to be able to fire its heavy weapon while hiding behind most obstacles; yet its significant bulk means that a higher proportion of enemy fire will hit, even when in stealth.

The Inquisitor is dangerous in the middle leagues and has limited viability in upper league play. It is a natural transition from using a Griffin and gives pilots experience in using stealth and ambush tactics. The Inquisitor struggles to complete in the higher leagues, especially in the current meta where players may use modules such as Quantum Radar.

These are effective setups for the Inquisitor:

Some common and powerful setups include a pair of Tarans with either an Ember or Redeemer, since those heavy weapons share the same range (350 meters) of the Tarans (note the Ember bypasses Ancile shields and physical shields). The Redeemer and Tarans deal almost instant damage to the enemy due to the very fast projectiles, whereas the Ember usually requires leading (shooting ahead of) the target since the jet flame has a lag, which counteracts the way the Tarans fire. Using Orkans with the Ember is a way to alleviate this problem since the Orkans also require leading the target to maximize the splash damage, however the ranges of the Ember (350m) is different from the Orkan (300m). Excellent "Death Button" load outs include Cryo / Glacier and Orkan / Exodus.

Possible mid-range builds are Zeus or Calamity with Scourges or Ions, or Dragoon / Marquess. In a mid-range support role the Inquisitor can use its Descend ability for retreat if a brawler closes in, or use it to jump above cover to get a clear shot at the enemy. However, mid-ranged builds are generally not used on the Inquisitor as there are other robots that are capable of dealing more damage, such as the Fury. 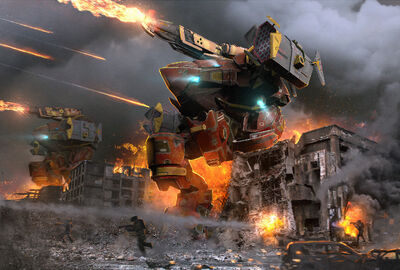