The Hover is a medium robot with 2 medium and 1 light hardpoint.

Hover's ability is called Glide, which when activated the robot jumps in the air in a fashion similar to a Griffin, however it is about 1.5 times the height of the Griffin's, but with a slower descent (a "static" Hover jump lasts about 6.5 seconds vs 4.5 seconds for a Griffin). Keeping the jump button pressed increases the altitude of the jump, making the robot fly higher as the button is held down longer. It also allows sustained static or horizontal flight for as long as the "fuel" lasts. However, all maps currently have an invisible "roof" that impedes the Hover's maximum height. In Dead City, for instance, the "roof" corresponds to the height of the tallest buildings.

After landing the Hover has a 7 second cool down before the ability can be used again, no matter the amount of "fuel" left.

When falling down from a ledge the jets are activated and the glide ability can be used without engaging the initial jump, which is useful to reduce exposure while still benefiting from the glide possibilities. However, since the initial jump lifts you to considerable height without costing fuel, the distances traveled with the "jumpless" glide are shorter.

The Hover's Glide ability allows it to control the flight trajectory unlike other robots that can jump. Gliding too high can result in exposure to enemy fire, while gliding too low can result in hitting structures and obstacles that could trap the Hover or be extremely difficult to escape.

When properly used by an experienced pilot Hover has unparalleled mobility. In sustained horizontal flight the Hover's speed is very similar to a max-speed Rogatka, or about 60 km/h. Flight can be sustained for 13-15 seconds depending on take off and landing points. For instance, a Hover starting from near the ledge near beacon B in Springfield can land on beacon D in less than 15 seconds. As reference, the distance a Hover can fly over level ground is almost exactly the full length of the Shenzhen central square (from beacon A to C). To obtain fast horizontal flight the pilot must activate glide while moving in the desired direction then use the jets in short pulses about one second apart to maintain constant altitude. The glide capability also allows the Hover to move between different vertical planes in ways most enemy pilots will not expect, such as jumping down from the "corridor" in Yamantau, hiding under it, then flying back up in the corridor on the other side to attack again. However, the glide ability is better used sparingly and not as a simple way to "get someplace faster," since one is always trading cover and maneuverability for speed.

Unlike with most jumping bots, after first acquiring a Hover it is advisable to open solitary custom games on each map and train. This helps the pilot understand each map from the Hover's flight perspective, find the best firing angles, and landing and take-off points, as well as learning the Hover's unique flight dynamics (how to steer, control altitude, etc.). When using the Hover's ability pilots should be aware of exposure to enemy fire, especially snipers, and have an "escape plan" ready.

Hover is very tough to beat in the mid-leagues. Once it jumps it slowly glides to a destination, making rockets and splash weapons hard to coordinate their hit. Unfortunately, due to lack of defensive abilities and long exposure during flight, Hover does not make a big impact on the battlefield in high leagues.

Some effective setups for the Hover are:

Common load-outs for the Hover in lower and middle leagues include 2x Orkans and 1x Pinata, 2x Tarans and 1x Magnum, 2x Tulumbases and 1x Pin. or 2x Punisher Ts and 1x Punisher. Dual Scourges with a Spark are effective but require more skill to utilize effectively while using the Hover's ability. 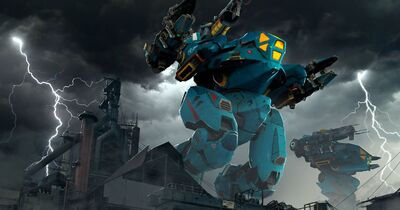