“…A swift robot for those who prefer an aggressive playstyle. Hellburner is able to quickly close the distance and inflict serious damage to all enemies nearby…” – in-game description

The Hellburner is a medium robot with a heavy and a light hardpoint. (Hellburner 3D Model)

Hellburner's unique ability is named Overload. Upon activation the bot receives a 100% speed boost for 5 seconds (120 kph at top speed), then detonates, dealing tremendous damage to all enemies (see table) within 75 meters. This damage is applied equally to all robots and shields in range.

Upon death the ability activates regardless of charge status, dealing half the amount of damage as a normal burst.

Hellburner has relatively high health for a medium robot. Hellburner is best used to attack enemies grouped closely defending a position, or to ram into and "hug" a single bot to destroy it. Because of its ability, Hellburner often causes enemy robots to spread out and give up a position (or a beacon), or allow squad mates to push into undefended areas.

Hellburner's playstyle encourages use of weapons such as Glory/Halo for the lockdown and immense damage, Glacier/Rime for the slowing effect and the AoE damage, Ember/Blaze for the consistent DPS, or Ancile/Ecu for incredible survivability. It is not recommended to use Lock-On weapons as you will often lose target on an enemy due to your speed and the many robots attempting to take you down.

Hellburner is often used as an opener in Beacon games to cap center beacon at the start of the battle. Due to its explosion damage and considerable speed boost it will often severely damage several enemies before going down, allowing slower, more durable tanks to lumber in and obliterate remaining resistance. Since the 7.0.0 update, Hellburner no longer damages itself with the ability use, which allows Hellburner commanders to adopt a much more effective brawling playstyle instead of playing as a kamikaze bot.

The ability can be used to gain short bursts of speed to key points. Given the ability's relatively short range of 75 meters, pilots must be careful to keep multiple enemies nearby. Using the ability solely for faster movement is recommended as it does not damage itself anymore. As such, Lock-Down Ammo or Lockdown weapons will help root enemies in place so they can't escape Hellburner's explosion, however Jump Unit can also be considered due to the increased speed during jump. It also allows the Hellburner to destroy enemies flying overhead with Overload provided the commander's timing is right. It is, however, more worth it to use Phase Shift or Advanced Repair Unit due to how vulnerable Hellburner is when its ability is not active.

The Hellburner is especially effective against Ares, Hades, Demeter and Nemesis groups, as they rely on banding close together to make use of their Absorber shields, which allows the Hellburner's explosion to damage multiple bots. Furthermore, the Pantheon robots rely on their shield for survivability, and they are actually very brittle without it. It is also effective against robots that provide cover with an Aegis or standard energy barrier (e.g. Bulwark, Fenrir, Blitz, Cerberus, Fujin, Carnage, Haechi, Jaeger and to a much lesser extent Typhon), and also robots that provide healing to allies provided they remain in a certain distance (e.g. Weyland, Mender, Tyr, Demeter and to a lesser extent Nightingale, as the Hellburner's overload will most likely not be able to scratch the flying Nightingale).

Hellburner is most effective against either spider robots such as Weyland and Fujin, or robots that rely on their ability to survive, such as Leech or Ares. Spider robots often sacrifice their movement entirely in order to use their shield or healing, and also encourage grouping, which is perfect for a Hellburner. Robots like Leech will be taken down in 2 uses of Overload, not counting the damage from Hellburner's Heavy and Light slot.

Hellburner is considered a beacon capper and support unit, and is a moderate threat to more durable bots. However, given its self-destructive nature and lack of significant firepower the Hellburner can be easily dealt with by vigilant pilots. However, as a beacon capturer and spawn raider, it is rivalled only by Shell which has considerably less ability damage.

These are the recommended setups for the Hellburner: 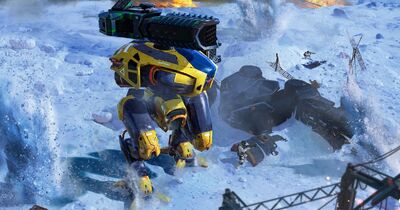