The Haechi is a medium robot with 3 medium hardpoints.

The Dash ability gives Haechi a quick burst of movement in any given direction. It shares this ability with the other two Korean robots, the Strider and the Bolt. The Haechi can store two Dash charges with a 10-second cooldown.

Haechi also has a medium-weak built-in energy shield like the Carnage and Fujin, allowing it to block all kinetic weapons and sonic weapons.

The combination of its abilities and three medium hardpoints makes the Haechi a formidable bot in the lower and mid-leagues. Haechi is capable of multiple playstyles, mostly ambush, assault and fire support.

In higher leagues one will rarely see this robot, in contrast to the days back in 2018. Piloting Haechi in leagues higher than Diamond will require great caution. Brawling is not recommended in higher leagues, since Haechi has mediocre health, almost no resistance, medium speed, while most weapons can penetrate its shield or destroy it very quickly.

As an ambush and assault unit the Haechi's double dashes allow it to dash to an area, unload its weapons, then dash back to cover, using its energy shield to protect it from enemy fire. As such, it is recommended to adapt this playstyle while inside compact maps such as Dead City and Power Plant.

As a support unit the Haechi can mount mid-range weapons like the Pulsar, Wasp and Hussar to target enemies from a safe distance. The use of mid-range tactics negates Haechi's slow base speed.

Haechi has a relatively low amount of hitpoints (HP), slow ground speed, and is vulnerable to energy weapons. Target tracing energy weapons such as Scourge and Skadi work well against the Haechi due to their ability to penetrate its energy shield, and remain locked-on to it, even when the target uses the Dash ability. Lock-down weapons or the Lock-Down Ammo module are even more effective against the Haechi since it prevents the robot from using its Dash to escape.

These setups are recommended for the Haechi:

A powerful setup for the Haechi is using high Damage Per Second (DPS) weapons, such as Storms, Havocs, Orkans, and Cryos. By using its Dash ability, the Haechi can quickly close to within 300 meters of its target, unload its weapons, and dash away while using its built-in energy shield for protection. For close range, burst weapons like Cryo are recommended over sustain weapons like Igniter since Haechi has low health, and isn't well-fitted for a brawler role. Haechi should Dash back to cover after unleashing a burst to reload and regenerate.

Tarans and Scourges are also popular builds, being able to counter other Haechis or other robots using energy shields. Ranged builds can include using Shocktrain, Ion, Scourges, and Tulumbas.

Extra info on Haechi's energy shield, version 7.7.7, collected by Bok the chicken (talk). (just because i like Haechis lol) 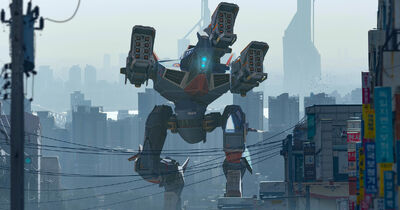 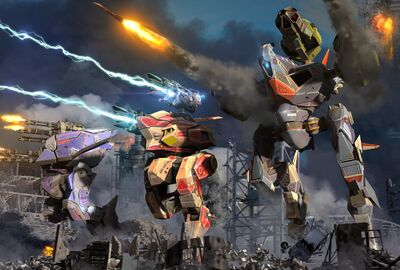