The Griffin is a heavy robot with 2 medium and 2 light hardpoints.  It has impressive jump height and decent firepower, allowing it to excel in the lower leagues.

The Griffin's Jump ability allows it jump higher and farther than the Cossack and the Rogatka, spending an average of 6 seconds in the air.  It has a 18-second cooldown which starts immediately when activated. The Jump ability allows the Griffin to ambush opponents and avoid or escape engagements against more powerful robots.

The Griffin is not very fast (max speed of 38 km/h) but its Jump ability allows it to escape a bad situation or deliver an ambush against an unsuspecting target. With two medium hardpoints and two light hardpoints the Griffin has substantial firepower.  The Griffin is susceptible to attack while in mid-air, and is particularly vulnerable to lock-on weapons.  With decent hit points (HP), the Griffin can absorb moderate damage, making the Griffin one of the most versatile robots in the lower leagues.

Griffin's combination of health, mobility and firepower gives it versatility in the lower leagues as long-range support (Molot Ts and Molots), an efficient ambusher (Tulumbas and Pins also called a "Russian Death Button," or Orkans and Pinatas) and mid-range support (Punishers and Punisher-Ts). The Griffin is a popular and iconic bot in lower leagues and can be used for transition in the mid-leagues.  It is a great bot for all beginning pilots to help with learning basic skills.

Some effective setups for the Griffin are:

Note: Although it has high damage output and anti-shield capability, using the Shotgun setup on the Griffin isn't as recommended as other Shotgun setups due to the Griffin's low health, making it inadequate for sustained close-combat brawling, which is where shotgun weapons are most effective. 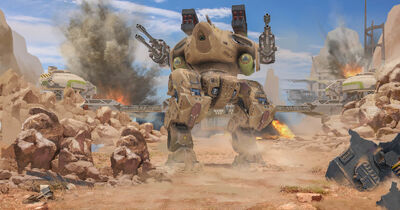 Griffin
Add a photo to this gallery

Retrieved from "https://warrobots.fandom.com/wiki/Griffin?oldid=343750"
Community content is available under CC-BY-SA unless otherwise noted.