The Gl. Patton is a medium robot with 4 light hardpoints. It can be obtained with silver making it a popular choice for beginning players in the lower leagues.

The Gl. Patton has 4 light weapon hardpoints, which is its primary advantage-it allows the robot to function as a Swiss army knife robot or to excel in a certain playstyle (with the exception of speed-based ones).

When equipped with high burst damage per second (DPS) weapons, the Gl. Patton is good as a ambush unit. Its considerable firepower allows it to maul or even destroy enemies of the same Tier in a single clip, while its high HP allows it to tank any damage it may recieve in return. However, due to its slow speed, getting back into cover may present a minor issue.

When equipped with more sustained damage-dealing weapons the Gl. Patton excels at providing mid-range to long-range support and suppressive fire. It allows the Gl. Patton to survive most sustained brawls and force enemies into cover with its high firepower and HP while also providing supporting fire for allies which helps them to destroy enemies faster or just to stop those enemies from coming out of cover in the first place.

The Gl. Patton may not be that good as a close-range brawling robot as despite its promising traits of high firepower and HP its low speed may present some challenges in getting to its weapons' effective range.

Counterplay: The Gl. Patton may be a very powerful Tier 1 robot but can be taken down with teamwork very easily. Due to its low speed, running away for as long as possible is a very viable strategy until reinforcements arrive, as the Gl. Patton may not be able to catch up entirely. However, if that's not possible, running straight into the robot, facehugging it, circling it and using mobility-enhancing abilities whenever possible can throw its targeting off-track and make it difficult to aim.

Threat Measure: With 4 light hardpoints the Gl. Patton can put out a lot of firepower and boasts one of the highest health pools in the Tier. As such, the Gl. Patton is considered a very high threat as a Tier 1 robot and can be used in the next Tier as well. However, its effectiveness is reduced in the next Tier and presents only a moderate-low threat, unless commanded correctly.

Downgrades: Destrier, Gepard, Jesse
The Destrier has just half the firepower of the Gl. Patton and much less HP, superior only in speed. The Gepard lacks also in firepower and HP, but has a considerably higher speed, which could make it an alternative based on your playstyle. The Jesse has the same firepower but can only have half of it active at a time, and despite its higher speed falls short in HP.

Alternatives: Bolt
This could be considered a downgrade by offensive-orientated commanders, but they are relatively evenly matched-the Gl. Patton has higher health and firepower while the Bolt is faster and boasts a Dash ability.

Tiered-up upgrades: Ao Qin
The Ao Qin is superior to the Gl. Patton in every way. It has a higher speed, slightly more HP and the same hardpoints but also has an ability which allows it to gain more speed, a vantage point and a powerful built-in energy weapon.

These setups are recommended for the Patton:

Popular load-outs for the Patton include Aphids, Pinatas, or Punishers. These combinations represent a massive amount of firepower. A Patton with quadruple Spirals can be a major annoyance and allows for finishing off wounded targets that are behind cover. Another combination is using Gekkos, as these are powerful at long range, especially in groups on large and open maps; Noricums can also be a viable (albeit less effective) long-range option for the Patton to deal chip damage to weakened targets. Quadruple Magnums may be used for short range combat. Lastly, Gusts could be used for effectively taking down energy shields, due to the shield catching all of the projectiles, even from a safe distance. 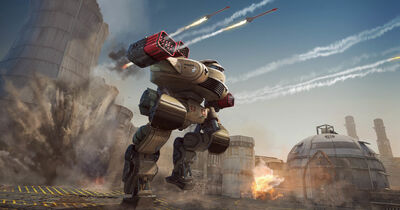