“…One of the fastest robots. Considerably outperforms most of the light robots…” – in-game description

The Gepard is a light robot with 3 light hardpoints.

The Gepard has a fixed speed of 58 km/h, making it the third fastest robot at base level (first being the Stalker at 66 km/h, the second being the Phantom at 60 km/h). By comparison the Cossack doesn't reach the same speed until level 9 (however, the Cossack can jump, and jumping is faster than walking). The high speed makes the Gepard a good beacon capper in the lower leagues, however its low durability means the pilot must be careful when engaging enemy robots.

The Gepard's speed and agility makes it good for hit and run tactics, dodging heavy gunfire as well as quickly changing position to get into the range of targets. On long range maps, such as Yamantau, the Gepard is good for flanking enemies and threatening the enemy home beacon.

These setups are recommended for the Gepard:

Using a trio of Punishers is the most cost effective way to deal good DPS (damage per second).  For close-in engagement, high burst DPS weapons such as the Gusts or Pinatas are recommended.  For skirmishing and hit and run tactics, Aphids or Pins are a viable choice.  Lastly, Gekkos or Molots can provide mid-range and long-range support. 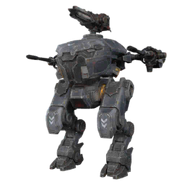 A plasma death button Gepard
Add a photo to this gallery

Retrieved from "https://warrobots.fandom.com/wiki/Gepard?oldid=337818"
Community content is available under CC-BY-SA unless otherwise noted.