“…Swift and sturdy. In the event of danger, Gareth can protect itself with a physical shield. Well suited for both capturing and defending beacons…” – in-game description

The Gareth is a light robot with one light and medium hardpoint.

Gareth has a built-in physical shield located on the robot's left side. The Gareth's Phalanx Mode ability lets it switch its shield to the front, similar to how a medieval knight uses a shield. When active, the shield blocks incoming projectiles from hitting its front torso, however, the robot's movement speed is decreased by 20%.

Equipped with one medium and one light hardpoint the Gareth has decent firepower for a light bot in the lower leagues. Gareth has extremely low health but its shield has relatively high hitpoints, allowing Gareth to do some close-in engagement and skirmishing against medium and heavy bots.  Gareth is well suited for countering stealth bots such as the Stalker, since the Gareth's weapons are situated low.  A popular weapon combination is Storm and Gust. Gareth can also make a moderate sniper, due to its shield, which can block all projectiles used in sniping (except for Noricum and Zenit).

With good speed, Gareth makes for an excellent beacon capper in the lower leagues. Gareth excels at flanking opponents and catching unsuspecting targets.

While the shield adds greatly to the Gareth's resilience, it does not render him invulnerable. Gareth is still vulnerable to rockets due to splash damage and it's shield will be broken after sustaining heavy damage.

These setups are recommended for the Gareth :

The most commonly used setup is the Taran / Magnum combination for two main reasons; first because it can inflict solid DPS (damage per second) especially for a light robot. Second, it damages robots while staying out of the range of 300 meter ranged rocket weapons such as Orkans, Pinatas, Cryos, and Rimes), as rocket splash damage can bypass the Gareth's physical shield.

Another effective set up for Gareth is using rocket weapons for high burst DPS up close.  This fighting style is risky; if you do not destroy your target Gareth is vulnerable in drawn out duels.

The Punisher setup is inexpensive and an effective damage dealer with more range than plasma (Tarans and Magnums), however doing less damage beyond 300 meters due to the bullet spread.

Lastly, Scourge / Spark allows the Gareth to damage units from a safe distance, albeit low damage from beyond 350 meters, but enough to be an annoyance. This setup is a more flexible, but not as specialized, version of the Taran and Magnum, due to it being able to inflict damage from up to 600 meters, but also doing solid damage from 350 meters or less, since Scourge and Spark increases in damage the closer the enemy is to the weapons. 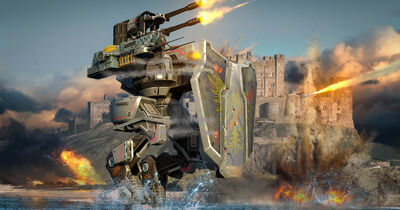 Gareth
Add a photo to this gallery

Retrieved from "https://warrobots.fandom.com/wiki/Gareth?oldid=343863"
Community content is available under CC-BY-SA unless otherwise noted.