War Robots Wiki
Register
Don't have an account?
Sign In
Advertisement
in: Silver, Robot, Unit, A to Z

The Galahad is a medium robot with a medium and 2 light hardpoints.

The Galahad has a physical shield located on the robot's left side. The Galahad's Phalanx Mode ability lets it switch the shield from the side to the front.

When the shield is in front of the robot, the Galahad's front (where most damage is received) is now protected from kinetic and energy damage, but its speed is reduced by 20%. The Galahad's physical shield does not protect the Galahad from splash damage, and from special damage (flamethrower or Scald, Incinerator and Scorcher projectiles), or from special abilities' damage from the Mercury, Hellburner, Shell, Kid, and Arthur.

Galahad's medium speed and good protection make him a viable robot in the lower leagues. Its sturdy base level shield health of 101K is one of the record health pools in the lower leagues. Galahad is good for close-in engagement to fight for beacons or area defense, and does well when paired with another robot equipped with an Aegis or energy shield since Galahad is vulnerable to splash damage.

If the Road Hog (+10%), Scout (+5%) and Adamant Road Hog (+20%) pilot skills are added, the Galahad is capable of performing well as a beacon runner. However, by the time these become possible it is recommended to attach them to better robots.

Galahad's sturdy physical shield can still remain relevant even in the presence of more powerful robots if used tactically. It can increase the Galahad's speed when in passive mode and protect against kinetic and energy fire when active. The Galahad's shield is most effective against enemy robots using energy weapons, as unlike other weapons they cannot bypass or deal extra damage to it.

Over the two default Modules, Nuclear Reactor is generally a better choice for the Galahad as it provides a small boost for its underwhelming firepower. However, if for some reason the commander has access to more expensive Modules, Nuclear Amplifier is the best pick for damage-dealing, plus some defense mitigation and healing as a bonus, while Nitro Unit is a good choice for a beacon runner commander, especially considering that Galahad's shield allows it to maintain the Nitro Threshold. However, despite that, the two most general picks for the Galahad would be the Balanced Unit and the Fortifier, the former as a jack-of-all-trades module to buff both the Galahad's attack and defense, and the latter to strengthen its already-powerful shield.

These setups are recommended for the Galahad:

Strong close range setups include Magnums / Taran, Pinatas / Orkan, Gusts / Storm, or Punishers / Punisher T. Combining a Scourge with two Sparks makes for a very formidable close-range and mid-range setup, due to the Galahad excelling at closing in on enemies that are using non-rocket setups. 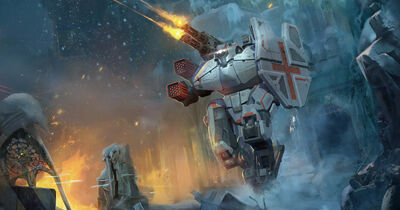