The Fury is a heavy robot with 3 heavy hardpoints.

The Fury excels at mid-range and long-range combat, utilizing three heavy weapon hard points it can easily cripple smaller robots, and deal massive damage. Despite its high hit points and immense firepower, the Fury shares the same weaknesses as the Natasha and the Behemoth, both having slow speed and a large frame. This means weapons with a bullet spread can hit it with more shots, which leaves the Fury vulnerable to close-in engagement.

Fast, agile robots can circle the Fury and continuously unload multiple volleys of damage making it hard for the Fury to target and return fire. When piloting a Fury it is critical to keep smaller and faster robots at bay. For squad support the Fury should select targets representing the greatest threat to teammates engaged in the front lines and to take out the opponents' mid-range and long-range threats.

The Fury should use its elevated hardpoint integrity to fire over cover while taking no damage in return. However, it is advised to pick targets on robots with Chimera, Hydra and Spiral (or Thermite, Vortex or Aphid) first as they can bypass your cover with their smart tracking attribute.

These setups are recommended for the Fury:

Note: The Avenger is in the 'mid-range' category due to it dealing significant damage at 500m range, despite it being most effective (i.e. dealing more damage) at close-range, due to bullet spread. Therefore, the Avenger is suitable both as a close and mid-ranged weapon.

The use of 3 Fluxes or Trebuchets provides the Fury with long-range firepower for sniping. In addition to dealing extremely high burst damage, it also bypasses energy shields, which are commonly used in the middle leagues on robots such as the Haechi.

Using 3 Tempests provides long-range suppression and support fire for teammates, dealing significant sustained damage per second. This setup is effective at breaking all types of shields, both physical, energy, and Aegis.

The Fury also excels as a mid-ranger using Zeuses, Calamities, or Dragoons. The Zeus and Calamity deal devastating damage in a short amount of time and remained locked-on to targets. Dragoons offers suppressive and supportive fire with a capacity for several energy bursts and a fire while reloading system, enhancing its operational flexibility. Due to its high damage output it is capable of destroying physical shields as well as bypassing energy shields.

A Fury with three Tridents or Avalanches can provide significant splash damage from mid-range. Robots confined to tight spaces or caught unaware can face high damage in a short amount of time. 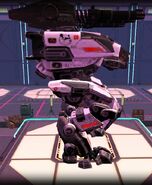 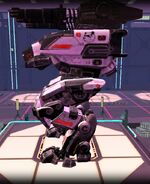