War Robots Wiki
Register
Don't have an account?
Sign In
Advertisement
in: Silver, Robot, Unit, A to Z

“…Four-legged sentinel equipped with an energy shield. Fujin is able to provide both cover and barrage for its allies, it is perfectly suited for area capture and control…” – in-game description

The Fujin is a quadrupedal medium robot with 3 medium hardpoints.

The Fujin's ability is called Sentry Mode, which immobilizes itself in exchange for a powerful energy shield, which can be bypassed by energy weapons. When in Sentry mode the Fujin's torso is raised for a larger field-of-view while maintaining the ability to rotate. The energy shield only recharges while the robot is in Sentry Mode.

Like every other energy shield, when a kinetic weapon hits the shield a blue honeycomb-like pattern will appear where the projectiles strike it. Fast robots can be dangerous for the Fujin, as they can bypass its shield by walking through it and unload their weapons at point blank range.

The Ancile shield activates as soon as Sentry Mode is initiated, whether or not the Fujin's torso has risen to its full height or not, so it serves as a good "Panic Button" which can block incoming kinetic Sentry mode has a two-second activation and deactivation time and has no cooldown. The Ancile shield only regenerates when the Fujin is in Sentry Mode.

Like its counterparts the Raijin, Weyland, Rayker, Jaeger and Invader, the Fujin is a quadrupedal robot. While it cannot climb like the Raijin or Weyland, this does give it special characteristics that other robots do not have. Firstly, quadrupedal robots do not suffer from landing lag when they fall from a high place. Other robots pause as they absorb the shock whereas the quadrupeds do not.  Secondly, Fujin, Raijin, Weyland, Rayker, Jaeger and Invader are significantly more maneuverable and capable of changing directions rapidly due to their legs allowing them to move in any direction without turning.  Other robots must rotate their lower bodies to the new direction. This means that the Fujin benefits from superior agility in addition to already being reasonably fast.

The Fujin has two weapon hardpoints that are relatively low on its torso, allowing it to hit small robots such as the Stalker, Pursuer, and Loki, while they are in stealth mode.

Since enemy bots can walk through the Fujin's energy shield to deal point blank damage, Fujin pilots should be aware of their positioning and know when to move to avoid the situation.  Vulnerability at very close range in addition to its 3 Medium hardpoints and energy shield make the Fujin perfectly suited to perform as a suppressor.

Fujin pilots must also be aware of snipers using energy weapons like the Trebuchet and Flux. The Fujin's under-average health means that even low-DPS (Damage per Second) sniper weapons can have a significant effect.

The Fujin's energy shield can also be used to protect teammates behind the Fujin from enemy fire due to its large surface area.

With a built-in energy shield, 3 medium weapons, and average speed, the Fujin is a high threat in the lower leagues. Its low health and succeptabilty to energy weapons makes it very vulnerable in mid-to-high league play.

Some effective builds for Fujin are: 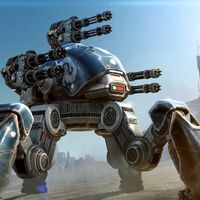 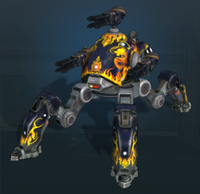