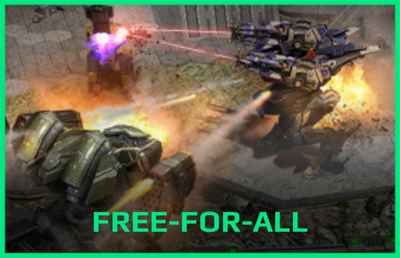 Free-for-all is a game mode that was introduced in the 3.8 update. There are no beacons and no friends or allies. Every person is for himself. This is the first Game Mode that allows you to restore destroyed robots with the use of restoration points which you gain by killing other robots in the match. The cost to restore a robot range from 3-10 points, and it increases with each subsequent robot after each restoration. The "Dominator" is worth from 10-25 restore points.

During the game an indicator for first, second, and third place is attached to the players with the most kills. Snipers are generally not recommended due to the fact players spawn 350-450 meters away from each other.

NOTE:  There is a kill timer in-game that is a hidden feature.  If you, for example, get a kill, you will have a kill-streak of "1".  If, for whatever reason, you do not get any more kills within 30 seconds, your kill counter will begin to blink.  This is a warning that if you do not destroy another robot soon, your kill-streak will be reset.  If you still do not get a kill within a period of time, your kill-streak will be lost, resulting in you only getting a single kill and the respective amount of tokens, instead of continuing your current kill-streak (Double Kill, Triple Kill, etc.).

This timer is invisible to players, and is likely an incentive to encourage brawling and constant engagements.

It is recommended that players' robots survive for as long as possible, and inflict a lot of damage. These two strategies need to be balanced though. Ambush tactics are quite common in this game mode, as everyone else is a potential threat. Keeping an eye on the distance and position of enemy robots is strongly recommended. Players are also advised to use robots with either speed, shields or high health (or all three) to maximize chances of survival, as well as having high (burst) firepower. Moving around to get into better positions is also a common strategy, but one must be aware that enemy robots could spawn in at random places as well.

Besides the already mentioned tactics, it is recommended for players with low level hangars that lack raw firepower to choose fast robots to be able to evade stronger enemies and attack weaker ones or go "kill-stealing" to make some points. Hit and run tactics in combination with luring enemies into each other and fast ambushes can work as an equalizer and outplay high leveled hangars.

Players with low leveled hangars should not pick their best robot to be the first to spawn at the beginning of a match, as at this point all robots spawn relatively close to each other and the chances are enormous that the first robot won't survive for very long.

In higher leagues, unless you own high level Inquisitors, Spectres or robots with the Dash ability, you should consider your first robot a likely sacrifice. However, with some skill it can survive and garner kills.