The Falcon has a unique ability called Fangs Out. In its 'passive' mode all damage the Falcon receives is reduced by 60% and the pilot can only use the center heavy weapon, with the two other heavy weapons folded behind the Falcon's back. When the pilot chooses to activate the ability, the Falcon deploys the two heavy weapons alongside the center weapon, however incoming damage is no longer reduced. Activating this ability means the Falcon gains significantly more firepower at the cost of reduced defense.

While the ability is active the pilot can trigger a jump at any time by pressing the ability button a second time. This can be used to get into a favorable attack position or escape from a bad situation. One tactic is to jump just before the ability ends, resulting in the damage reduction effect becoming active while in the air.

The ability lasts for twelve seconds before it switches back to its 'passive' mode, and has a cooldown of ten seconds.

Upon deactivation, both heavy weapons on the side automatically begin their reload sequence, provided they are not reload-while-firing weapons and have a partial clip remaining. This means they will almost always have a full clip upon ability activation.

The Falcon's unique ability sacrifices defense for sheer firepower, equal to the destructive potential of a Fury, as well as a jump that can be used once per ability activation. The jump is high enough to rival the Griffin's jump. While its ability is activated, the Falcon loses its damage resistance, leaving it much more vulnerable to enemy fire. This, and its average health and speed means that it's best used for ambush tactics.

The Falcon excels in one-on-one battles since it absorbs massive amounts of damage (60% defense resistance essentially doubles its current health), so carefully choose when to activate the ability. One heavy weapon can deal significant damage, particularly against robots with low durability. One tactic is to remain in "passive mode" absorbing damage while chipping away at the opponents hit points (HP), then finish off the enemy by increasing the Falcon's firepower with its ability.

A Falcon with the Traditionalist Pilot skill, known as a 'T-Falcon', utilizes a different playstyle. It sacrifices 2 of its heavy weapons and its jump for a dramatic (up to 50%) increase in durability, turning the Falcon into a true tank. This means that an MK2 Lvl 12 Falcon will effectively have a maximum durability of 837,000 (without modules). If you were to repair the maximum amount of durability possible and use two maximum level Heavy Armor Kit modules, the Falcon has an effective durability of 1,868,184, not including Drone and Mothership buffs as well as additional Pilot Skills.

A Traditionalist Falcon is able to literally walk through the enemy and even spawn-raid due to its insane amount of survivability. It can destroy inexperienced pilots easily, but when faced with a meta user who knows what they are doing, there is little the falcon can do due to its extremely limited mobility with the traditionalist skill. However, the falcon loses much of its usefulness when facing titans due to it's heavy reliance on defence, although it is capable of dealing massive damage despite its 1 heavy weapon slot, which is usually a high DPM brawling weapon such as Devastator and Ember.

Note: The Falcon is vulnerable to weapons with defense mitigation, such as Titan weapons, Hawk's Built-in-weapon (BUI) and the Volt, Weber and Gauss family of weapons.

Falcon is dangerous around opponents with no shielding or cover. When it activates it's ability it releases two heavy weapons with its damage reduction disabled, as well as becoming capable of using one jump ability per Fangs Out activation. This makes Falcon vulnerable but powerful. It should be considered a dire threat to meta robots with the right commander.

Traditionalist Falcon is a true tank that can disrupt the enemy by pushing beacons or attacking behind enemy lines, occupying several enemies for a time and also takes serval robots to take it down. No longer with the stress of activating the ability at the right time, the Traditionalist Falcon is extremely dangerous to most robots. 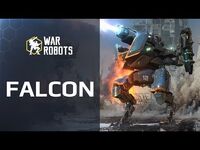