The Fafnir is a robot that has 4 Medium hardpoints.

In Tank Mode, Fafnir stays on the ground and gains 100 Defense Points (resulting in a damage resistance of 50%), as well as access to all four of its medium hardpoints. However, upon activation of Flight Mode, Fafnir takes off, dropping its damage resistance and holstering two of its medium weapons, and gains an impenetrable, invincible Absorber shield for 5 seconds (plus the time it takes Fafnir to get to a stable altitude), gains a 62.5% speed boost, and a built-in energy weapon which features increased damage the more damage the absorber shield takes (the damage stays as long as Fafnir is in flight) and 350m range as well as additional damage to Titans.

The Fafnir serves primarily as an ambush and mid-range robot, featuring powerful armaments, fast speed while in the air, and near invincibility if its ability and nearby cover is utilized well. It can also function as a beacon runner as a secondary role, but given the other abilities of Fafnir, it's not advised to devote the robot to the role.

As an ambush bot, the Fafnir usually relies on its target being in an area where it's not in the direct line of sight of any of its allies. When the target is in the aforementioned space, the Fafnir commander should activate Shapeshift to deploy its Absorber shield and flight, temporarily shielding the Fafnir from the target's attacks and and allowing the robot to get over the cover and at the enemy mech. As soon as the Fafnir's Absorber shield wear out, the commander should immediately terminate flight and land, in order to activate its damage resistance which mitigates the fact that the Fafnir has a relatively low health pool while not having Absorber active, as well as activating its other two weapons, allowing the Fafnir to shred the already-weakened opponent in a quick amount of time, taking minimal damage in the entire process due to cover, its Absorber shield and its damage resistance.

For being an ambush robot, the Fafnir should ideally utilize Anticontrol and Nuclear Amplifier as its only passive Modules, the former to prevent any effects such as Suppression or EMP stopping the Fafnir from performing its attack routine smoothly and thus losing much more health than it should, and the latter for its impressive damage bonus when Fafnir deals enough damage. As an ambush robot, Fafnir should, in theory, deal lots of damage while taking minimal in return, making the Nuclear Amplifier better than the Overdrive Unit or Thermonuclear Reactor in this role, the former as it requires Fafnir to take a certain amount of durability damage to activate, the latter as it generally gives less damage than the Nuclear Amplifier after the Nuclear Amplifier is fully boosted. For an active module, Death Mark allows the Fafnir to deal even more damage while ambushing the enemy, while Phase Shift and Jump Unit can provide some form of failsafe in case things go wrong in the ambush.

As a mid-range bot, Fafnir should use Flight Mode to get to a good vantage point (as well as providing Fafnir with an Absorber shield for protection against any enemy snipers), then engage Tank Mode to gain damage resistance and access to all of its weapon slots. The Fafnir's vantage point should always have some form of cover, as the Fafnir, while in Tank Mode, has no means to entirely negate damage, even temporarily, unless it engages Flight Mode for its Absorber shield. The Fafnir should always choose to fire at enemies which are attacking an ally that's essential for your team effort (for example, a healer robot or a robot with an energy shield), as they could come in useful in case the fight ever starts coming closer to the Fafnir's home territory. For this role, Nuclear Amplifier and Thermonuclear Reactor are the ideal module picks for commanders hoping to deal maximum damage, while Balanced Unit is also possible for those looking to play it safe. Death Mark is the ideal passive module for this role to maximize damage, as provided that things go right there's no need for a failsafe. Jump Unit can also be used to acquire a vantage point while attacking.

Another srtategy is to mainly stay in Tank mode, and only use flight to get to good spots on the map, and then killing enemies from range with powerful sniper weapons like Wasp, Pulsar, and Weber.

If the Fafnir commander wants to maximize Fafnir's weapon damage, wait until enemy robots are firing at you, then activate Flight Mode. This will absorb any projectiles on the way to hit Fafnir, and the enemy bots might keep firing, thus increasing built-in weapon damage.

These setups are effective for the Fafnir:

The Fafnir's built-in energy weapon fires 10 energy projectiles per second, with a maximum range of 350 meters.

Fafnir's built-in weapon gains additional damage output bonuses based on how much damage the absorber shield blocked while active. While there is no cap on the bonus amount afforded to the built-in weapon, the formula for converting blocked damage to weapon bonus damage is unknown as of v7.7.7. 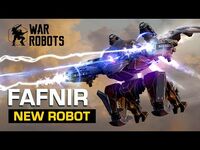