Dreadnought is an asymmetrical map. It is a good map for close range combat and there are several positions ideal for long-range setups too. It is likely based on the Star Wars movie the "Force Awakens" crashed Star Destroyer on Jakku.

You can go in, on, and around the ship, the rear wide open fields and close quarter to fight in, therefore it is good for close and far range combat, it Is best you use dash or jump bots or other quick bots on this map, as there is a lot of ground to cover.

Dreadnought is a good map for going full offensive as it is one of those maps that is easy to get around, you can sneak up behind your enemy and surprise them. The beacons have a lot of cover as there are ship parts surrounding them, it is a good tactical position.

It is worth remembering using cover around the central Beacon and surrounding area is highly recommended, because enemy players can easily ambush you from the more exposed flank or from above.

Situational awareness and making good use of obstacles as cover is essential when going around the crashed ship, because the near-featureless terrain on the sides of the map exposes you to enemy fire from the top of the crashed ship as well as from enemy snipers far ahead. Enemy robots can also attack from the ship’s open sides as well, so be vigilant.

When capping beacon D, it is recommended to use the “tubes” between the beacon to your advantage. By hiding underneath them, It works well with a heavy as it can reduce the damage of a Zenit and a Noricum. Perfect for reloading your abilities, or weapons.

A good strategy is getting a jump robot or a Raijin (climbing ability) and get onto the top of the ship; from there you can snipe and get around quickly, you can also jump in from above and capture beacons quickly.

Since Dreadnought has a lot of cover, it is best to use it to your advantage. However, it is difficult to utilize this cover against splash weapons and homing missiles. 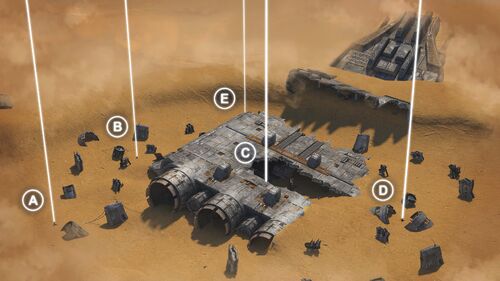