Start a Wiki
watch 02:21
The Loop (Games)
Do you like this video?
Lua Script Error Detected 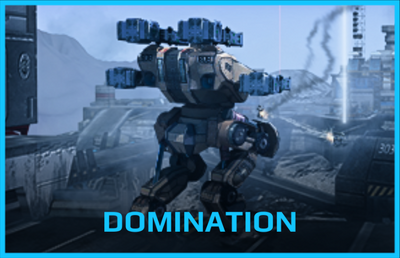 Domination was released April 14, 2014 (with the release of the game), being the only Game Mode available until Beacon Rush was released. It is a 6v6 player Game Mode in which two sides fight for beacon supremacy.

In Domination mode there are 2 ways to win. By capturing and holding beacons (the more beacons you control the better your team's chances are of winning), or destroying all enemy robots within the 10 minute limit.

Domination being the first game mode presented during the release of the game is also one of the more longer and challenging game modes in lower leagues due to having to spawn so far away from the captured beacons.

Watch the amount of robots in your hangar before just rushing in like a kamikaze.

After the capture of a beacon try to hold it for as long as possible to keep your beacon meter full.

Use obstacles and timing to eliminate the opponent while taking the least amount of damage.

Retrieved from "https://warrobots.fandom.com/wiki/Domination?oldid=269863"
Community content is available under CC-BY-SA unless otherwise noted.