“…A weathered brawler highly familiar with mid and close-ranged combat. Possesses 4 medium slots, but only 2 can be active at the same time…” – in-game description

The Doc is a medium robot with 4 medium hardpoints, but can only use two at a time.

Players can use all of the same type of weapon or a combination of kinetic, rocket and plasma. Using weapons with different ranges allows Docs to be both support and a skirmisher.

This robot is one of the three Quick Draw robots alongside Jesse and Butch.

The Doc has a relatively high speed for a medium robot allowing it to also act as a solid beacon capper in the lower leagues since it can often outgun its light opponents and has more hit points than the Rogatka and Kumiho, which are common beacon-cappers.  In the middle leagues the Doc should play as a mid-range support robot to make sure it takes less damage. However, in lower leagues, it can perform a wide variety of roles, including beacon-capping, brawling and providing covering fire for allies to advance.

By making strategic use of the ability of the Doc, you can potentially fire continuously for extended periods of time. It can also be used to switch between two different sets of situational weapons (e.g. Orkan and Taran) in order to be ready for all possible situations. If you are performing the latter role, be sure to prepare special weapons in advance (ideally Energy and Explosive weapons) to be ready for any situation, so you can counter any robot regardless of if they have a shield or not. Kinetic weapons are ill-advised because of their inability to penetrate any shields (although they do double damage to physical shields).

Note:  It is not possible to mount an Ecu to a Doc.

These setups are recommended for the Doc:

It was anticipated that Doc would be a "gunslinger", such that the appropriate weapon would be the Punisher T. Equipping 4 Tulumbases or Orkans will make good use of the Quick Draw ability to exploit reload times and protect themselves and beacons. Although Doc has limited knife fighting ability (due to the low HP), the Quick Draw ability makes for a good all-purpose robot. 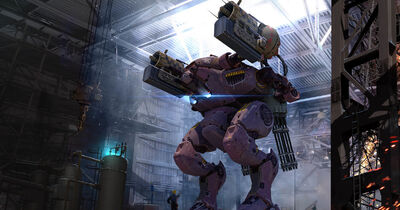