The Destrier is a light robot with 2 light hardpoints. (Destrier 3D model)

The Destrier is the first robot a player will start with, and allows the player to get used to the controls and the "feel" of the game. It is a decent bot in the beginning leagues when equipped with dual Punishers. It quickly becomes obsolete as you progress through the game as it is outclassed by multiple same-Tier bots.

The Destrier is an all-around light bot that can be used for flanking, close-in engagement, and capturing beacons.

The Destrier's decent speed and durability make it a good flanker, however its low firepower means that it is unable to do much damage once the flanking maneuver is complete, unless fighting against other low-level small bots. Against larger, tankier heavy robots the Destrier practically stands no chance.

For brawls, employing facehugging and circling is a great tactic to throw the enemy's targeting off, especially if they're one of the aforementioned heavy robots. The Destrier's decent health pool allows it to survive minor damage without much problem, while with enough time its two lights can eventually take out an off-target heavy robot.

The Destrier is also a fairly good beacon capper. It has a decent speed and health pool which allows it to tank enemy sniper fire while running to cap a beacon. However, due to its inability to quickly finish off brawls it is recommended to pick a route which forces intercepting enemies to walk through sniper fire or the range of a passing brawler to keep them discouraged to attack you.

Counterplay: The Destrier is quite easy to counter. Its mediocre HP and low firepower combined make it relatively unformidable in a fight with almost any other Tier 1 robot.

Threat Measure: The Destrier is a low threat even as a Tier 1 robot, as while it is a decent all-rounder it excels in nothing and therefore can be outperformed in everything it does. It also has many direct upgrades in the same Tier, enhancing its image as a disposable training-bot.

Upgrades: Jesse, Gepard, Gl. Patton, Bolt, Stalker
The Jesse has more speed, HP and two extra light hardpoints (although they aren't always active) compared to the Destrier. The Gepard is similar, with more speed, health and an extra light hardpoint. The Gl. Patton has double the firepower of the Destrier and more health in exchange for some speed. The Bolt has an additional light slot, more HP, more speed and a Dash ability. The Stalker has much more speed, slightly more HP, equal firepower and a Stealth ability.

These setups are recommended for the Destrier:

The Destrier is best used with two Punishers. Spirals can also be used early for newcomers to help them get familiar to the lock-on feature. Molots feature more range than Punishers for mid-range and long-range support. Pinatas are good for high Damage Per Second bursts. 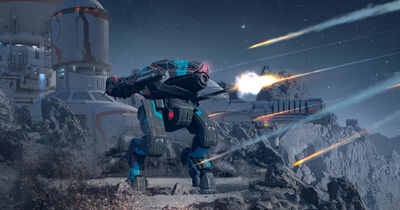