The Demeter is a Medium Robot with 3x medium hardpoints.

Demeter's ability is named Support Cover. Upon activation the Demeter teleports to the selected ally, a process taking 3 seconds, then deploys an invincible Absorber shield for 5 seconds to protect itself and its chosen ally as part of 'Phase 1' of its ability. During Phase 1 of its ability, it will slowly heal all allies within the dome, including itself, by 1006 HP per second at a base level. Upon Phase 2 of its ability, it will calculate how much damage was absorbed by its Absorber shield during Phase 1 and then use that damage to boost its final repair pulse, akin to the Tyr when it switches into Support Mode. Its final repair pulse heals the Demeter and allies by 18,962 HP in an instant (at base level), but it can be boosted up to 100% [needs verification] by damage absorbed by the Absorber shield during Phase 1. After the ability ends the Demeter deactivates its Absorber shield and enters a 20-second cooldown phase.

To choose which bot the Demeter will teleport to when using Support Cover, a blue lock-on box appears when pointing Demeter's camera in the direction of an ally, like the one on Nodens. It will not affect Demeter's red aiming box for targeting enemies, and lock-on weapons will always target the red box, never the blue box, even if there is no enemy to lock on to. It cannot be changed with manual aiming. Demeter's teleport range is 400m. BE WARNED: The blue teleport target box will appear on screen even beyond a range of 400m. However, if the ability is activated beyond a range of 400m, Demeter WILL NOT teleport (although the ability will still be activated).

The Demeter fills a unique role on the battlefield, blending ambushing with support. It performs this by teleporting to an ally and deploying an impenetrable, invincible Absorber shield while healing itself and all allies within the shield. When the ability ends the Demeter is vulnerable to enemy fire, so it is recommended to find cover or use teammates for protection during cooldown.

The Demeter should always repair any allies in a tough spot, as the additional firepower, Absorber shield and repair can be a godsend for the aforementioned robot and can sometimes turn the tide of battle. When played in co-ordinated squads, multiple Demeter's can teleport in sequence to provide lengthy periods of protection via the Absorber shields, while also adding extra firepower to the group with every teleportation. However, in a worst-case scenario where even with the Demeter's support, the robot will most likely still be overwhelmed by enemy forces, it's advised to flee prematurely from the scene and prepare to teleport away from the battle as the Demeter is a valuable asset to the team and will be a huge loss for your allies if destroyed.

The Demeter can access many places where other robots cannot go normally. There are two methods for this. The first is by running into a wall (an example is the central Power Plant reactor), and since the Demeter can float it will fly up to the top of the building. The second is by waiting for a flying ally (this includes Hover as well) to stop flying. After they stop flying and land somewhere where non-flying enemies can't reach, the Demeter can use its ability to teleport to its ally, providing them with healing for the damage they might've sustained while flying and also reaching a tactical position in the process.

Candidates of Active Modules to mount on the Demeter include Phase Shift to help your Demeter survive when its ability expires, Lock-Down Ammo and Death Mark to provide a tactical advantage for robots that are within your Absorber shield or Shieldbreaker and Quantum Radar to take out enemies with Absorber (and Aegis or energy shields, but they aren't the top priority while Shieldbreaker is active) and stealth respectively. Repair Unit and Advanced Repair Unit are not recommended as Demeter's ability already takes care of repairing not only for itself but also for allies.

Passive Modules which could be mounted on the Demeter include the Heavy Armor Kit to increase its general survivability and thus the amount of health repaired, or Last Stand and Cloaking Unit to provide it with temporary protection in critical situations. Anticontrol could potentially be useful in helping you deny lock-down, suppression, and EMP, all of which will stop you from performing at your peak as a support robot. Thermonuclear Reactor and Nuclear Amplifier could be used if trying to maximize Demeter's firepower in its role as an ambusher. Overdrive Unit is not necessarily ill-advised, but considering that when functioning as an ambusher the Demeter should take out the enemy while the Absorber is still active, the Overdrive Threshold will be hard to reach.

These setups are effective for the Demeter: 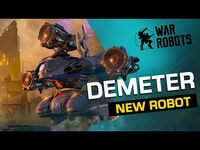 Demeter armed with three Hornets as seen in a 2021 skirmish