View source
watch 02:46
The Quarry - The Loop
Do you like this video?
Play Sound

Defense Points is a special game mechanic similar to robot armor. It provides resistance to damage to robots in a non-linear fashion.

It was first introduced with the addition of the Battle Born passive module, and later on, certain pilot skills.

With the introduction of Titans, Defense Points are an integral part of determining how much damage resistance a Titan or Robot (robots such as Fenrir, Falcon, etc.) carries. Defense Points translate to a certain % of damage reduction (reduces damage from all sources), or directly extra % of health.

The formula for resistance (% damage canceled) is

and the formula for % damage received is

where x is the amount of defense points.

NOTE: It is impossible to fully become invincible according to this formula.

This is because the formula is actually hyperbolic, with a bit of translation and stretch to the graph. This means the increase of resistance would gradually slow down and approach 100%, but never reach 100%. Also, the % resistance you get is always less than the Defense Points, and this diminishing will become more and more obvious as the total Defense Points increase.

For example, a Haechi with the Legendary Pilot skill gives it 25 permanent Defense Points. It cancels 20% incoming damage, which actually equals giving Haechi 25% more health. Viewing the pilot skill this way shows how it is actually quite good (better than a maxed Armor Expert skill).

These are the robots that use Defense Points/damage resistance.

These are all the Titans that use Defense Points/damage resistance

These are the modules that use Defense Points/damage resistance

This table will show you how much damage (%) reduction a robot (or Titan) gains based on its overall defense point value.

Effective Hit Points is a statistic meant to represent how much damage is needed to destroy a robot when various defensive components and abilities are considered.

The formula for calculating Effective Hit Points is: 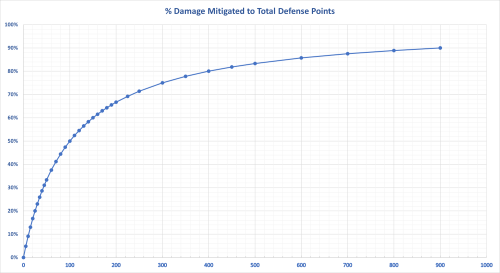