Dead City is a barren city map with many buildings, its canyon like layout and small map size make it perfect for close range combat.

With plenty of cover and few positions that give line of sight for long range weapons, knife fighting bots such as Vityaz equipped with an Thunder and two Pinatas, Boas with an Orkan and an Thunder, Rogatkas with twin Orkans or Tarans, Gl. Pattons with 4 Pinatas, and the DB setups for the Griffin will easily excel here.

Medium range weapons are also useful especially on the long open areas on each side of the map. But the large amount of cover will make it difficult to avoid being ambushed or flanked by robots with more powerful short range weapons.

Long range weaponry such as the Kang Dae or Gekko are extremely limited use except perhaps when positioned up on beacon D and B. However a Zenit, Noricum, or Spiral can prove to be useful due to the extreme amount of cover and the fact that these weapons can, with practice, ignore cover.

Being the smallest map, slower medium robots can easily capture beacons and travel to the enemy's spawn point. So light robots specializing in beacon capture are less vital than usual. However well armed Cossacks are can be particularly troublesome for their ability to jump over and behind cover, harassing opponents and forcing less agile robots to continually recapture lost beacons. Beacons usually change hands more often on this map than on any of the larger maps. Players will want to be especially vigilant of the beacon indicators as in the heat of intense short range combat they can easily miss that their beacons are being over run. 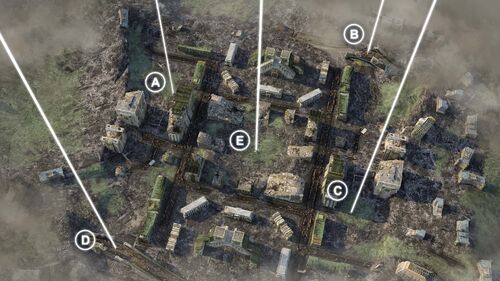 Retrieved from "https://warrobots.fandom.com/wiki/Dead_City?oldid=266232"
Community content is available under CC-BY-SA unless otherwise noted.