There are seven types of currency in the game:

Another Note: There was another type of currency called Workshop Points that is here.

Is the most easily acquired type of currency. However, it is worth noting that Silver is also the most needed currency later in game, due to enormous upgrade prices of the weapons\bots from level 8 and above.

Silver is awarded for a variety of accomplishments during battles: most significantly the total damage dealt to enemies. Other events that earn silver are: number of robots destroyed (killing shots), number of beacons capped, and number of critical hits (shots that destroy weapons or slow a robot's movement speed). Winning the match will add a 50% bonus.

Additional Silver can be purchased in the game by spending Gold, and you can earn more silver per match by buying Premium.

Is more difficult to acquire, its most important use is unlocking hangar slots. It can also be used to purchase certain robots and items, most of which are highly sought after. Another uses includes accelerating upgrade times or enhancing a robot to Mk2.

A player earns 50 Gold each time they level up.

Gold can also be earned during battles by doing the following:

Each day two daily missions are assigned which award gold (20, 30 or 40, depending on task) when completed.

Additional Gold can be purchased by spending real life money:

If you do not play for an extended amount of time, when you log back on, you may be awarded with a specific amount of gold based on the time (this feature might’ve been removed by Pixonic without our knowledge). The longer you aren’t online, the more gold you are rewarded. It isn't recommended to use this way to get gold because you can't play without having a second account. However, if you haven't played in a long time due to a busy life or a holiday, then it can be a pleasant surprise. 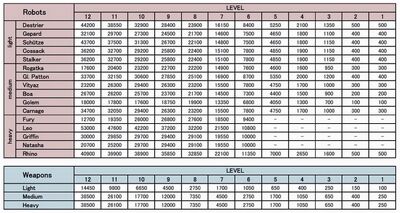 Are used to activate active modules. Power Cells were added in Update 4.6, and Pixonic sent everyone a certain amount of Power Cells; the higher the player's league, the more they received.

Currently every use of an active module will cost 20 power cells. You can get power cells by:

1. Buying them with gold:

2. Getting them in Battle Rewards:

Not: If you have no power cells left, it will cost 8 gold to activate a single use of an active module.

Is used to buy and upgrade Titans and their weapons. Currently you can only get this from daily tasks, but Pixonic claims that they will add other ways to obtain it. Platinum was added in Update 5.6 with the arrival of Titans. Once a user reaches Level 30, they will receive (amount) Platinum.

Retrieved from "https://warrobots.fandom.com/wiki/Currency?oldid=292893"
Community content is available under CC-BY-SA unless otherwise noted.