The Cerberus is a medium robot with 2 medium and 1 heavy hardpoints.

Cerberus' ability is called Blackout. When activated its hull opens up and reveals three energy cannons which each fire an energy charge in sync with each other with 350m range followed by a ten-second cooldown. Its cannons will inflict lock-down, immobilizing the enemy, suppression, reducing the enemy's firepower by 50% and corrosion, which steadily inflicts damage-resistance-bypassing damage over five seconds, at 1024 damage per second at base level. The energy charges cannot be negated unless the enemy is equipped with the Anticontrol module. All of Cerberus' energy cannons are energy-type weapons. The charges bypass Ancile shields but can be blocked by Physical shields, Aegis shields, and Absorber shields.

The Cerberus is also equipped with a passively-regenerating Aegis shield, which blocks all kinds of fire including flamethrower weapons. It starts off with a measly 16,000 durability, but regenerates passively at a rate of 3% per second (needs verification). When it is fully depleted, it will only reactivate when it has been regenerated to 20% durability.

The Cerberus is the second community bot and is unique in that its built-in weapon can inflict three out of five effects: lockdown, suppression and corrosion to its target. With its two medium and one heavy hardpoint, the Cerberus can produce high firepower and burst damage per second (DPS).

The most common tactic for Cerberus pilots is to use the built-in Aegis-class barrier mounted on the Cerberus to provide temporary protection while engaging the enemy. Timing is key. A Blackout shot in conjunction with a full salvo from the Cerberus' weapons is extremely effective. However, due to the extremely low hitpoints of both the Cerberus and its Aegis shield the Aegis barrier should only be used to provide temporary protection, allowing the Cerberus to fire its Blackout cannons at an enemy without taking (much) damage. When the Blackout hits the enemy, the Suppression provided will allow Cerberus to expose itself for five more seconds due to the reduced damage inflicted by the enemy.

The 350m range of the Cerberus built-in weapon limits the play style of the bot to mostly close-in engagement. Cerberus's relatively weak Aegis shield means the bot should not be used for sustained brawling (unless the enemy has successfully been Blackouted), meaning that Cerberus's playstyle is mostly limited to hit-and-run close-range engagements, unless the enemy has successfully been hit by its Blackout cannons (which gets rid of the hit-and-run limitations (for five seconds)) or if the Cerberus is equipped with the Alexander Frost pilot (which gets rid of the close-range engagements limitation).

Cerberus' ability can inflict multiple negative effects on enemies. It is a significant threat in the middle leagues and a moderate threat in the upper leagues.

The Cerberus is best used for close-in engagement to take advantage of its 350m built-in weapon and Aegis shield, however it can function relatively well as a mid-range robot unit as a normal robot (although this wastes Cerberus' potential), using its built-in Blackout cannon as a final resort for robots that get too close.

These configurations are not recommended on the Cerberus:

Note: The DOT effect lasts for 5 seconds per stack. 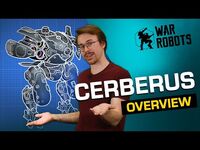 Cerberus' blueprints as seen on the official War Robots website