Start a Wiki
watch 02:21
The Loop (Games)
Do you like this video?
Lua Script Error Detected

Castle is a map that was released in version 4.4.

Pipes connect the two sides of the map, as there is a large chasm in the middle. If a bot walks into the chasm, they will fall to their death. It has large castle-like ruins on one part of the map, and there is a bridge on the other side. Underneath the bridge, there is a smaller bridge underneath that can provide shelter from artillery and homing weapons. In the middle is a giant pipe that stretches into the air.

There is plenty of cover all around the map that is usable.

The beacons are placed in a shape akin to a pentagon. Two beacons on each side are protected by a reasonable amount of cover, while the beacon on the far bridge is exposed. However, there is a small bridge under it that can be used as temporary shelter from enemy fire.

This map likely favors close-range combat due to the proximity of the beacons and the amount of cover available, but there are certain portions of the map that are perfect for snipers. In the center of the map is a large gorge that serves as a barrier to split the map into two distinct sides. This also serves as a hazard area, as any robot that falls in will be destroyed.

There are two very long pipes that connect both sides, but because of how small they are, it is important that players watch where they step. Otherwise, they will fall into the gorge. 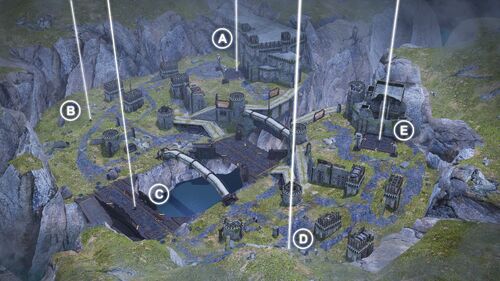 Retrieved from "https://warrobots.fandom.com/wiki/Castle?oldid=266221"
Community content is available under CC-BY-SA unless otherwise noted.