The Carnage is a medium robot with 2 heavy hardpoints.

This robot's Rush ability increases its top speed by 66%. This allows the Carnage to reach a theoretical top speed of 71 km/h (max level), making it one of the fastest robots in the game. The speed boost lasts for 10 seconds, followed by a 20-second cool-down period. Well-timed Rush activation allows the Carnage to quickly close in on an enemy target, or to quickly retreat from danger and take cover.

The Carnage's built-in energy shield acts like an Ancile, meaning it will block kinetic weapons, but not energy weapons. Evading damage for a short time allows the shield to recharge and the Carnage to preserve its health. The shield can also protect teammates as well, making the Carnage a great robot to accompany when rushing down opponents. Also, like the Ancile it regenerates 3% of its capacity per second, and needs to regenerate to 20% capacity for the shield to reactivate.

The Carnage has lower durability and hit points (HP) than other brawlers such as the Lancelot, Invader, Fenrir, Bulwark, and Falcon. The Carnage is best for capturing beacons and defending them, since it can deal significant damage at close range with the correct setups.

The Carnage can equip two heavy weapons. When paired with its Rush speed-enhancing ability and its built-in energy shield, the Carnage is a very versatile bot that is suitable for close-quarters, medium-range and long-range combat.

Despite its high potential firepower and modest speed the Carnage is fragile, having below average health even with the built-in energy shield. Because of this, a Carnage commander striving for close-range combat should employ hit-and-run tactics using its Rush ability, flanking the target first, then speeding in, employing surprise and quick-unload weapons to catch the victim off-guard and to cripple them, using the energy shield to defend against any attempted counterattacks and then escaping behind nearby cover, or even back to the starting point provided Rush is still active.

The Carnage is also capable of engaging in mid-range firefights. Its two heavy hardpoints provide enough firepower for the role, while its Rush ability allows tactical repositioning to fire at enemies and to get away if things get rough. Due to the moderate DPS that weapons have in this role, the Carnage's energy shield should be able to survive for a long time, and even if it does go down the Carnage can always use Rush to get behind cover and regenerate the shield.

The Carnage is a less suitable sniping candidate than other Tier 2 bots, but is capable of it anyways. The role is extremely similar to mid-range firefighting-exchange shots across the map, use the energy shield to absorb any counterattacks, then fall back behind cover using Rush if it goes down.

Similarly, all Carnage commanders are advised to avoid any weapons with considerable spread, as the robot's shield will catch most, if not all of their shots. This will deal immense damage to the Carnage's shield and bring it down within a few shots, leaving the vulnerable hull exposed to any enemy to shred. Also try to keep distance between yourself and enemies at all times, as they can run past the robot's energy shield and ignore it completely from the inside.

Counterplay: As mentioned above, any commander that has a problem with the Carnage can employ energy weapons. Due to the Carnage's low health without its shield this will deal crippling damage to the robot and leave it scarred for the rest of the battle. If that's not possible, weapons with large spread are useful for taking down the robot's energy barrier and exposing it to any teammates willing to take the kill. Similarly, using weapons with high burst damage can take down the robot's shield quickly, leaving it exposed to any remaining ammo and allies. Of course, simply using a high-speed robot and running into the Carnage's energy shield is as viable a counter as ever too.

Threat Measure: As a robot that is versatile but skill-requiring, the Carnage has a very wide threat spectrum. In the hands of a commander unable to correctly command the robot, the Carnage is a low threat even as a Tier 2 robot, as it can easily be countered by many methods. However, if commanded correctly, the robot's ability to close ground quickly and shred enemy robots without taking much damage makes it a high threat as a Tier 2 robot.

Upgrades: Raijin
The Raijin is of a considerably different playstyle to the Carnage, but is in its progression due to a similar hardpoint choice and shielding. The Raijin has considerably more health, marginally more speed and two physical shields with more health than Carnage's shield each, while also gaining a 35% damage buff while in its ability. However, the Carnage's ability speeds it up instead of rendering it immobile, while its shield can regenerate, theoretically giving it a limitless amount of shield health. Overall however, the Raijin is better.

Tiered-up upgrades: Bulwark
The Bulwark is almost a direct Tier-up from the Carnage, boasting considerably more health, more speed, more shield health, an Aegis shield instead of an energy shield and an additional physical shield, however the Bulwark lacks a Rush and can only regenerate its Aegis while it is inactive.

Some effective builds for the Carnage are:

The cheapest (since they already come on the robot), and one of the most effective load-outs for the Carnage are two Thunders. Thunders are very effective at close range and augment the Carnage's characteristics.

For mid-range the Dragoon, Zeus, and Tempest are the recommended set ups. The Dragoon and Zeus penetrate Ancile shields while the Tempests have a very high cycle DPS (damage per second). Dual Tridents can be a powerful setup due to dealing over 42,000 splash damage (when both are at max level) which are effective against bots close to corners or when tareting a cluster of enemy robots.

The Carnage is a versatile robot which works well in many roles in the lower leagues. 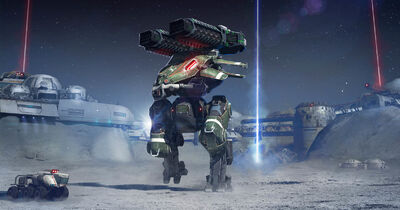